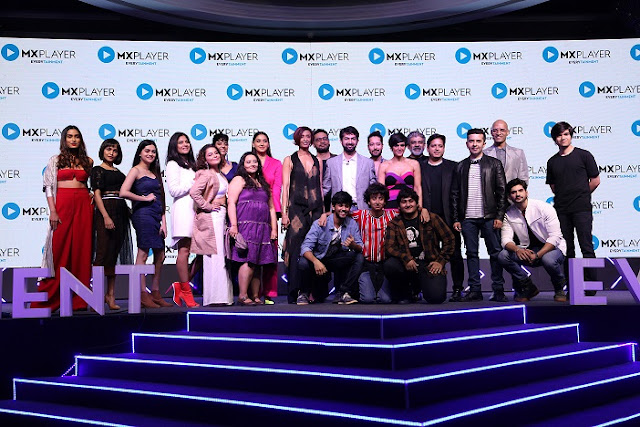 MX Player, the world’s largest local video player and India’s biggest entertainment platform with 70 million daily active users, today announced the launch of its first 5 MX Original Series’ that will go live starting 20 th February. Streaming premium content for free, this ad supported video on demand platform hosts a large repository of over 1,00,000 hrs of licensed content from leading content creators and partner platforms such as Alt Balaji, TVF, Arre and SonyLIV amongst others. MX Player is also the first and only Indian entertainment platform that integrates all forms of entertainment on one app – top grade offline video playing capabilities, online streaming and music streaming powered by Gaana, as offerings for its viewers.

Present in every 1 out of 2 devices sold in India, the app has consistently ranked among the top 10 Android apps since 2012 and is available across - Android, iOS and Web. Speaking at the launch Karan Bedi – CEO, MX Player said, “Our vision is to build a platform that caters to every entertainment need of the discerning viewer starting from playing a video in any format, to watching stories across every genre and even listening to music for every mood! As more people move towards consuming content online, we want to create digital-first stories that appeal not only to the urban audiences but also much beyond. We have collaborated with some of the best talent in the industry to create our slate of MX Originals that will bring us a step closer to becoming the go -to destination for entertainment in India.”

Driving synergies with this vision is the new brand ideology wherein MX Player defines
‘Everytainment’ – a promise to deliver entertainment for every mood. Elaborating on the same,
CEO Karan Bedi said, “Everytainmnet is the core of our product and combines not just all forms of
entertainment but also caters to content for every season, every reason, every occasion and most
importantly, every mood. So whether you're happy, sad, mellow, active or excited, we have a story, a song or a moment for you. We showcase films, web series, sports and news, and with our original programming, we are exploring various new genres spanning satire, drama, comedy, chat shows, historical sagas, biopics, big ticket reality shows and more across multiple languages. The new music tab on our platform will allow viewers to stream music, powered by Gaana on the same app and has made us the one stop shop for all things entertainment. ”

The 5 new MX Original Series will appeal to different audiences across varied geographies. Be it
Aafat which is about 5 women who are breaking stereotypes while struggling to get married in
Delhi’s arranged marketplace; Hey Prabhu that traces the story of a twitter god who has to navigate
the offline troubles of life; ImMature, A TVF Creation that is a coming-of-age story about the many
first adventures of 3 young boys in school; Lots of Love (in Tamil and Telugu) which is a story of
four friends and how a trip changes their lives or Famously Filmfare which goes regional and will
see powerhouse actors like Priyamani, Chinmayee, Bhavana Balakrishnan, Surveen Chawla, Abir
Chaterjee and Amruta Khanvilkar turning host for different regions through the series – these are
shows championing diverse stories ranging a wide spectrum.

The product has been built from scratch with a simple and intuitive interface and offers sub-one-
second latency to its viewers, which translates to instant streaming. By using massive scale
datasets, MX Player has created a world-class recommendation and personalization engine. By
far, it is the only platform to build such an engine in-house, which sets it apart from the competition.
Additionally, MX Player is leading the way in video tech by building better compression algorithms
to optimize streaming on the top of global compression standards like H-265. To further enhance
the user experience, the app comes with features like adjusting volume and screen brightness
on the go while streaming, vertical trailers for special shows and offline playback feature which
allows users to download content and view without an internet connection. The app is built keeping
low-to-high end devices in mind and works well for the fluctuating network.

MX Player is the world’s No.1 entertainment app offering viewers high quality, digital first content. With over 70 million Daily Active Users (DAUs) and 650 million downloads worldwide – it is
the largest entertainment platform in the country, present on 1 out of every 2 smartphones. Defining
“everytainment” for viewers with entertainment that suits every mood, it currently operates on an ad
supported model and is a free to use app for premium content. MX Player provides users a wide
online streaming library of over 100,000 hours of licensed content, across 10 languages and an
exciting slate of MX Original Series with genres ranging across drama, comedy, reality and romance.
From the stable of Times Internet (the digital venture of Times of India, India's largest media and entertainment group), MX Player has consistently ranked amongst the top 10 Android apps since
2012 and is available across Android, iOS and Web.