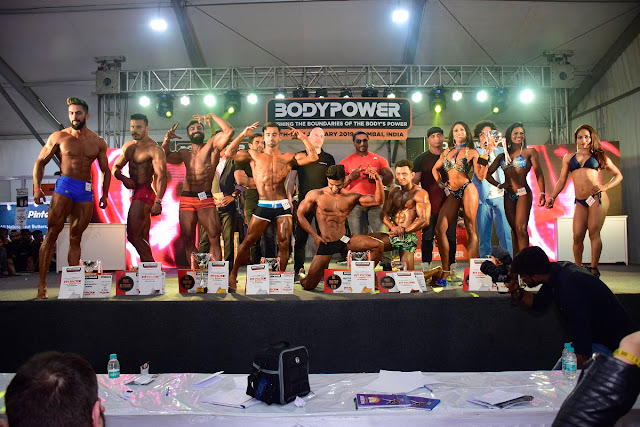 Pushing the boundaries of the body’s power and set across an action-packed three days, BodyPower Expo was an event that simply couldn’t get ignored within the fitness industry, attracting not only International and Domestic athletes, bodybuilders and fitness enthusiasts but also thousands of key buyers, distributors and manufacturers across India, Pakistan, Bangladesh, Thailand, Singapore, Malaysia and UAE.

BodyPower Expo featured fitness activities like FitFactor India Championship, Mr. BodyPower BodyBuilding Show and also hosted Miami PRO which is world's most renowned Fitness Modelling show at the Expo. The overall winner of Miami Pro India Championships will get an opportunity to compete at Miami PRO World's Championships which will be held in UK. In addition to the Miami Pro, Dorian Yates Classic Championships was also held and judged by Dorian Yates himself. For the first time ever, BodyPower Expo 2019 featured Women's Panel Discussion called Super Women Of Fitness, Benchpress and Deadlift, Kick boxing and Karate for children, MMA fight on Friday, 11th January, Saturday 12th January and Sunday, 13th January ’19. Additionally, BodyPower also arranged for Ground Assault Circuit at the Expo.

Commenting on the occasion, Nick Orton, CEO, BodyPower said, “Whilst I may have started BodyPower in India by training Bollywood superstars, it was always my intension to take our inspirational message about the importance of staying fit and healthy, to everyman. After six years working in the country, I have seen a monster change in peoples attitude to fitness – now it reaches every corner of this great country, and I think that BodyPower has acted as a catalyst to drive that change, with our expo’s and events creating fever pitch levels of excitement amongst the youth in particular. This year’s BodyPower Expo is full of excitement, challenges and top quality competitions! Visitors to the events will witness world class athletes performing in front of their eyes; they will get the chance to meet and talk to a plethora of fitness superstars and I will be the guest MC, talent spotting and having some fun along the way…prepare for the most widely anticipated tour ever to grace the country, you cannot fail to be motivated and inspired.”

ABOUT BODYPOWER INDIA:
BodyPower India is Asia's largest sport, fitness, wellness and nutrition exhibition, set to attract over 50,000+ visitors in 2019, 11th-13th January celebrating its 6th Anniversary in India.
BodyPower India is the fitness hub of Asia, attracting thousands of fitness enthusiasts, key buyers, distributors and manufacturers from all over Asia!
Posted by SUJATA TAWDE at 5:35 AM

So classy, so decent and useful touch has been dropped here on this beautiful page. The healthy bodies look so sound and healthy-lol. Love to stay in such kind of precious thought and writing. Seriously this was one of the best read regarding to health and fitness issue. Feel fortunate to learn about BodyPower Expo. The features and functionality you expressed was very authentic and effective. I would like to appreciate it and of course thanks for sharing such a fitness gaining guidelines. Again I feel a desire to share my favorite place from where I get huge health benefits and tips and it's https://mystretching.com/. May be some guys here looking for such type of interest.

What a health and fitness awareness creating touch you did here for your fans and body builders! My pleasure I was scrolling my pointer down the browser's search page for grabbing some information about emergency medical technicians (EMTs) contributions, how much does an emt make and if the are considered as first responders and suddenly the title of your post drew my prompt attention. Glad to know about body power expo, it's 6th celebration, features. You really deliver huge fitness and health inspiring data here that was attract me much.