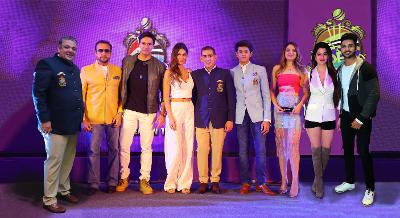 The inaugural edition of the Dreamz Premier League will begin from 24th February 2019, a battle between 20 teams will be seen live on Leading Sports Channel for the 1st time ever in the history of underarm cricket.

Saturday evening witnessed the Grand Launch of Dreamz Premier league by its Founder Mr. Wasib Peshimam and Co-Founder Mr. Arhaan Peshimam along with Gulshan Grover, Bruna Abdullah, Zoya Afroz,  Kainaat Adora, Rajneesh Signal, Mrinal Deshraj, Zuber Khan and many more luminaries who unveiled the highest prizes to be given in the history of underarm Cricket.

All the matches are to be played at St.Stanislaus Turf,  Bandra and the League is seen a platform for budding youngsters across the country.

“There are several over-arm cricket leagues being played in India, hence to provide recognition to the young a professional under-arm cricket DPL will be live on Leading sports channel ” Wasib announced.

Apart from the launch of the League the bidding process of the players too kick started with some of the players being bought by the teams at mind-boggling virtual points.Dreamz premier league created history as for the first time a closed auction process had taken place. A special software was designed for the Close Auction.
Event manage by star connect & PR of the DPL is handled by Naghma khan of Shaaz Media Entertainment.
Posted by SUJATA TAWDE at 6:01 AM

Delhi Capitals 2019 IPl player list have to be one of the most eagerly watched teams this time around. They possess plenty of exciting young Indian batting talent at their disposal. Having traded Shikhar Dhawan into their squad, the revamped franchise can unleash a strong lineup. Overseas pacers Trent Boult and Kagiso Rabada headline a world-class seam attack.

This league is always one of the best cricket leagues. Especially the opening and closing ceremony is the best part. The schedule of T10 season 3 has been announced and I am hoping it would be good too just like dreamz premier league.