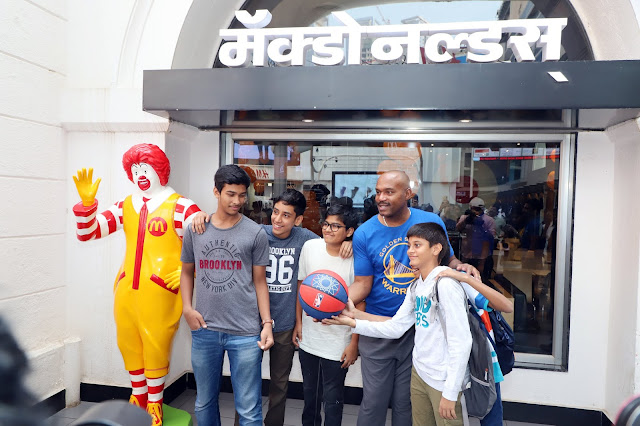 From Nov. 13 till Dec. 12, McDonald’s will give away an NBA-branded basketball with every family meal purchase at any McDonald’s restaurant in the West and South region while stocks last.  McDonald’s will also introduce NBA Zones in more than 30 outlets, providing fans the chance to experience the atmosphere of being at an NBA game through a range of interactive experiences.

“We at McDonald’s believe that playing sport is crucial to the overall development of children,” said Seema Arora Nambiar, Sr. Vice President of Strategy, Innovation and Capability, McDonald’s India.  “Globally McDonald’s is associated with various sports and this Children’s day we are partnering with the NBA to encourage children to step out and play to have fun and create happy childhood memories.”

“We are excited to partner with a global iconic brand like McDonald’s,” said Yannick Colaco, NBA India Managing Director.  “This campaign with McDonald’s is a perfect way for us to deliver new and engaging NBA experiences to our fans.”

McDonald’s in India aims to convey the message of encouraging kids to be more active and participate in sports.  The family meal was created with McDonald’s core values of sharing in mind, and consists of a Burger, Naan, Rice Bowl, French Fries, Potato Wedges, two servings of Coke, as well as a Dessert.

About the NBA
The NBA is a global sports and media business built around four professional sports leagues: the National Basketball Association, the Women’s National Basketball Association, the NBA G League and the NBA 2K League.  The NBA has established a major international presence with games and programming in 215 countries and territories in 50 languages, and merchandise for sale in more than 100,000 stores in 100 countries on six continents.  NBA rosters at the start of the 2018-19 season featured 108 international players from 42 countries and territories.  NBA Digital’s assets include NBA TV, NBA.com, the NBA App and NBA League Pass.  The NBA has created one of the largest social media communities in the world, with 1.5 billion likes and followers globally across all league, team, and player platforms.  Through NBA Cares, the league addresses important social issues by working with internationally recognized youth-serving organizations that support education, youth and family development, and health-related causes.

About Hardcastle Restaurants
Hardcastle Restaurants Pvt Ltd (HRPL) is a McDonald’s franchisee with rights to own and operate McDonald’s restaurants in India’s west and south markets. HRPL has been a franchisee in this part of India since its inception in 1996.
HRPL serves approximately 200 million customers, annually, at its 287 (as of September 30, 2018) McDonald’s restaurants across 39 cities in the states of Telangana, Gujarat, Karnataka, Maharashtra, Tamil Nadu, Kerala, Chhattisgarh, Andhra Pradesh, Goa and parts of Madhya Pradesh, and provides direct employment to over 8,700 employees. McDonald’s operates through various formats and brand extensions including standalone restaurants, drive-thru’s, 24/7, McDelivery and dessert Kiosks. The menu features Burgers, Finger Foods, Wraps and Hot and Cold Beverages besides a wide range of desserts. Several of the McDonald’s Restaurants feature an in-house McCafé.
The pillars of the McDonald's system – Quality, Service, Cleanliness and Value – are evident at each of the restaurants where HRPL operates.
Posted by SUJATA TAWDE at 6:43 AM

I have a fancy on your posts. I like to read articles. They are useful. I hope you can share more knowledge and tips with us. Thanks a million. I wait for next posts. They are my cup of tea. thanks for the post.shopify best currency converter , sale discount app on Shopify , Create Discount master , best apps to boost sales on shopify