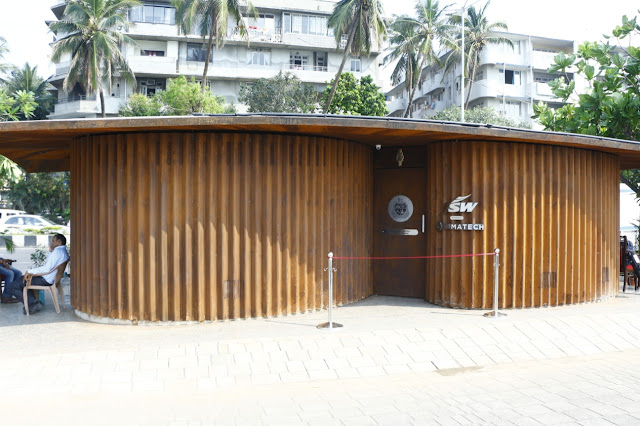 The Mumbai Municipal Corporation of Greater Mumbai (MCGM), JSW Group, Samatech and NPCCA, announced the completion of Mumbai’s first cleantech sanitation facility at Nariman point Marine Drive. This unique sanitation facility has been constructed as first-of-its-kind co-creation. The state-of-the-art world-design sanitation facility will be opened for public on October 2 and serve thousands of Mumbaikars who throng the 3.7 km-long promenade. 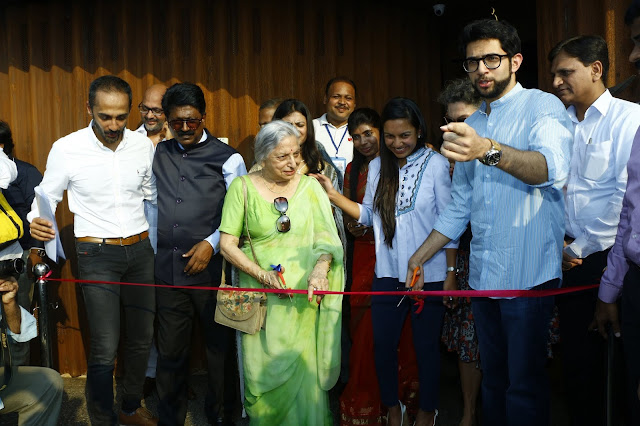 ü  90% Less Sewage: Since every flush saves 90% of water as compared to traditional toilets, it reduces the sewage generated by nearly 90%. This allows the Marine Drive Toilet to store of all sewage in an integrated tank. The integrated storage tank has a capacity to hold sewage of up to 8000 users.

ü  Intelligent Sewage Disposal: Given the Vacuum technology and reduction of sewage, the MCGM suction trucks will able to collect the sewage on weekly basis and dispose it at their sewage treatment plant. In effect the toilet saves millions of liters of raw sewage from entering the Marine Drive Bay area every year.

ü  Solar Powered: Curved solar panels, supplied by JSW Energy, are shaped to snugly fit the curvature of the doubly curved roof. These solar panels will generate enough power to make this close to a net-zero energy public project.

The two primary sponsors of this sustainable toilet project are the JSW Group and Samatech. However, many stakeholders have joined hands to make this toilet project possible. The MCGM, Local Corporators, MLAs, MPs and Citizen Groups of the area encouraged this initiative and provided the opportunity to JSW and Samatech to construct this world class facility for the people of Mumbai. The NPCCA Citizens Association have been instrumental from the beginning to suggest a world class sanitation facility for this famous boulevard. JSW and Samatech have worked together with Serie Architects to conceptualize a design that would exemplify the values of sustainable environment design and technology. Many other Companies & Consultants have contributed their time, their expertise and their materials free of cost to the project to make it a reality and create this facility for the betterment of the city.

Speaking about this project, Ms. Tarini Jindal-Handa of JSW Group said, “Marine Drive is a place that’s close to every Mumbaikar’s heart. The toilet is a small but significant addition to the face of the promenade. The toilet has been designed using Weathering Steel, specially cured by JSW for this project, which ensures durability and sustainability of the structure, against the vagaries of nature.  The vacuum technology used ensures judicious use of water and city resources. Further, the Solar panels on the roof, ensure that Toilet is self-sustainable in terms of its energy consumption. We hope that this project shows the way in terms of how various stakeholders can co-create a public utility designed to improve the lives of individuals in the city ,in a smart ,aesthetic and sustainable manner. The JSW Group is proud to dedicate this facility to the city of Mumbai.

Talking about this project , Mr. Akshat Gupta, co-founder of Samatech, said, “A Sanitation solution is only as good as its sewage disposal system and its limited use of natural resources. While preparing the solution for the Marine Drive toilet, our aim was to design a system that not only saves the large amounts of fresh water wasted in flushing but also enables the correct treatment and disposal of sewage. We are proud that this vacuum toilet, with its estimated use, will save a few million liters of fresh water each year in our city where every water drop counts. Additionally, due to vacuum technology, this toilet will also prevent a few million liters of raw sewage from directly entering the Marine Drive Bay each year. In this time where there is an urgent need for sanitation, a pressing need to save water, and a vital need to reduce our polluting impact on Mother Earth, we hope that this toilet will serve as a template that can be replicated at multiple locations.”

Speaking on the design of the facility, Mr. Kapil Gupta, Serie Architects said,“The S-shaped configuration of this facility provides a clear separation between the male and the female toilets, while slim fenestrations ensure adequate cross-ventilation through the toilets and privacy for users. The curved rooftop extends outwards and can offer shelter to visitors from the occasional downpour and respite from the hot sun. The design is inspired by Art Deco style and will serve as a model of sustainable environment values, design, and technology.”

Speaking on behalf of NPCCA Citizen’s association, the President of NPCCA Smt Swarn Kohli said, “A toilet was a necessity on Marine Drive for walkers and visitors. This modern eco-friendly solar powered facility will serve the public well. Users now have a responsibility to ensure proper usage.”

The nearly 100-year-old Mumbai’s iconic boulevard Marine Drive also popularly called ‘The Queen’s Necklace’, is one of the most famous places visited by tourist and locals alike, to stride along the walkway, jog, practice yoga and to view the stunning sight of the setting sun at dusk. In the fast-paced life of Mumbai, Marine Drive instils a sense of calm and serenity while being a favourite hangout for citizens from all walks of life. The launch of this sanitation facility will bring respite to millions of people visiting this iconic promenade.

Samatech: The Samatech Foundation is a social development foundation with a vision to introduce sustainable and clean sanitation technologies to the Indian Subcontinent. The Foundation’s mission is to employ sanitation technologies that are smart, cost effective, clean and environmentally friendly in nature. The foundation holds that sanitation is not a luxury for the affluent community, but rather a necessity for all Indian people. The Samatech foundation works with the local Municipalities and Corporations to identify, facilitate and fund sanitation projects for the local communities and endeavors to take active participatory role in execution of these projects.

NPCCA: Nariman Point Churchgate Citizens’ Association (NPCCA) was set up in 1981 and Nariman Point Churchgate Citizens Welfare Trust (NPCCWT) was set up in 1989. NPCCA functions as a voluntary public interest organisation free of commercial and political interests. It works on issues for improving the neighbourhood and quality of life of its residents. Late Mr. Nani Palkhiwala, eminent jurist, was a Patron of NPCCA and had guided and advised NPCCA on its activities.
Posted by SUJATA TAWDE at 8:00 AM