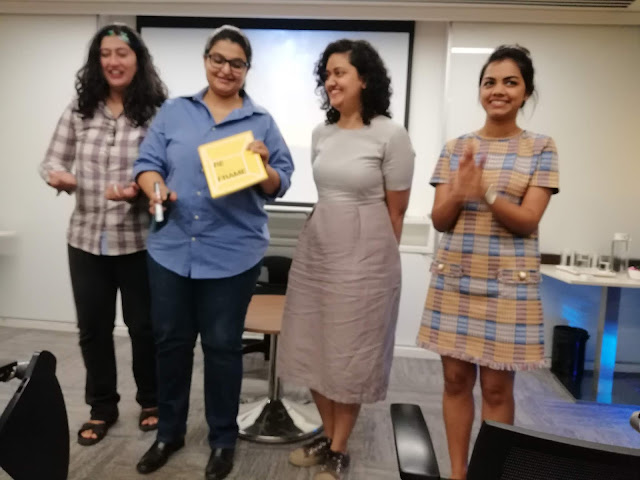 Mariwala Health Initiative (MHI), a philanthropic initiative by Harsh Mariwala dedicated to mental health, has launched ReFrame at a mental health workshop on the occasion of the upcoming World Mental Health Day that is celebrated every year on October 10th. 2018.

This edition of ReFrame highlights how various communities face mental health concerns. Almost 9.8 million one to seventeen year old Indians are in need of active mental health support. Persons from economically vulnerable backgrounds face a risk for schizophrenia that is 8 times higher than those from privileged backgrounds. Overall, persons with disabilities (PWD) are estimated to be 8% of the population and social attitudes and stigma gravely limit their lives. In efforts to reach vulnerable communities, ReFrame details how MHI partners have delivered services to 24,196 persons who live with economic vulnerability, almost 7500 adolescents & youth and to almost 13,000 persons from Dalit, Bahujan, Adivasi communities.

The workshop was conducted by well-known experts in the field of mental health including Deepa Pawar – Winner of 2018 “Tell her Story” contest by the UC Berkeley Institute for South Asia Studies,           Bhargavi Davar – Internationally known mental health activist, Arjun Kapoor – Lawyer, Psychologist at Centre for Mental Health Law and Policy, Aparna Joshi -  Assistant Professor, School of Human Ecology, at Tata Institute of Social Sciences (TISS) and Rajvi Mariwala, Director of the Mariwala Health Initiative. The speakers focused on critical counter-narratives to any dominant norm related to mental health and topics included gender and violence and impact on mental health, mental health intervention in urban bastis, the Mental Health Act 2017 and tools for reporting on mental health.

Arjun Kapoor, eminent Lawyer and Psychologist at Centre for Mental Health Law and Policy, while discussing the inclusions and rights included in the Mental Healthcare Act of 2017, said “This is the first time in the history of the country we have a law that recognises mental healthcare treatment. This law is effectively a charter of rights for a person who is being treated for mental illness and it provides a whole list of safeguards, procedures, and compliances to respect, protect, promote and fulfil the rights of a person with mental illness.”

Stressing on the rights-based approach and explaining the dire need for creating public awareness against discrimination, Kapoor added further, “Suicide has been decriminalised. Sexual orientation cannot be a ground for discrimination. Also, basis on the principle of parity all persons with mental illness should be treated equally with persons of physical illness and one cannot have separate standards of treatment for mental illness and separate for physical illness.”

Tanuja Babre who is a program coordinator at iCall pointed out that mental healthcare access in India is a dismal situation because most mental health professionals are in metropolitan cities and at the same time there are many barriers to accessing mental health treatment starting with language, gender, money, and all of these factors including the psychosocial environment that we live in should not determine how we access these services. Understanding one's sociocultural reality is important when you consider a therapist.
iCall is a counselling system that can be accessed through a helpline, chat as well as email and it is reached nearly 65,000 people and attended nearly 58,000 calls. iCall gets calls from people in tiny villages all the way to Indians living abroad. People also type out emails in other languages for email counselling.

Deepa Pawar, award winning activist and founder of Anubhuti Trust, shares the experience of working in urban bastis in Kalyan Dombivli, on youth advocacy and mental health insists that a local, simple language, using intersectionality of gender, sexuality and caste is critical for working in community mental health. "This is important if we want to break barriers and improve access to mental health care. Agar vacuum cleaner door to door ja sakte hain, toh mental health door to door kyun door to door nahi ja Sakta."
Anubhuti is an organisation that works on development of minority communities via youth leadership and addresses sexual and gender discrimination issues at a grass root level. Pawar explained that while dealing with these various aspects they realised that all these perspectives eventually lead to stresses that affect a person’s mental health. One cannot work on resolving these issues in isolation. Also, the traditional dialogue around mental health is either misunderstood or not comprehended by these communities at a grassroot level, making it extremely difficult for tackling the stigma around it.

Kavita Nair, Social Worker and Arts Based Therapist has been actively involved in community mental health and inclusion services programs of the BAPU Trust, Pune, India. In talking about the Seher program, which runs in 5 urban slum communities, Kavita raises important questions: " Instead of deciding who needs treatment, the dominant discourse should instead ask what should we do for better inclusion of persons with mental health issues in society." She asserts that communities are full of resources like mahila mandal, youth groups so "We need to shift the focus from fixing the individual in isolation to considering the entire ecosystem when responding to mental health." While impairment is spoken about, the barriers that a person with impairment may experience are never shared.

“ReFrame is not only an effort to transform existing discussions around mental health, but also to widen the scope for participation in these crucial conversations,” said Rajvi Mariwala, Director, Mariwala Health Initiative.

Mariwala Health Initiative (MHI) is a funding agency for innovative and inclusive mental health initiatives, especially those that are committed to making mental well-being accessible to the marginalized persons and communities. Through our prioritization of such projects, MHI aims at creating an understanding of mental health that goes beyond narrow medical definitions and signals a shift towards inclusive, holistic, and empathetic programs.

MHI’S seven partner organisations have varied channels through which they function, and diverse communities in which they operate. Each organization has directed attention to mental health in significant ways, and vastly increased overall dialogue. MHI has partnered with organizations that have a comprehensive approach to mental health, and are invested in using innovative methodologies aimed at creating a well-rounded mental health ecosystem. These include Centre for Mental Health Law and Policy, iCall Psychosocial Helpline, Anubhuti, Family Courts Project, Bapu Trust, Bhor Foundation, and Anjali.
About Mariwala Health Initiative (MHI)
For further details on Mariwala Health Initiative (MHI), please click on mhi.org.in
Posted by SUJATA TAWDE at 3:57 AM

This bit of the information is about the history and it is incredible. People need to participate in the convincing ways. People take off to watch the film and making fun and https://legitimate-writing-services.blogspot.com/2017/12/essayswritingorg-review.html website provides well task. You share an extensive variety of the incitement in this article.

What a wonderful article on much needed
initiatives around mental health for
the underprivileged. Inspiring and
do keep it up !
Chennai Minds
Best Psychiatrist in Chennai

I recently came across your blog and have been reading along. we provide Best Urologist at affordable prices. for more info visit our website.

Love what you're doing here guys, keep it up!.. Billing Outsourcing Services