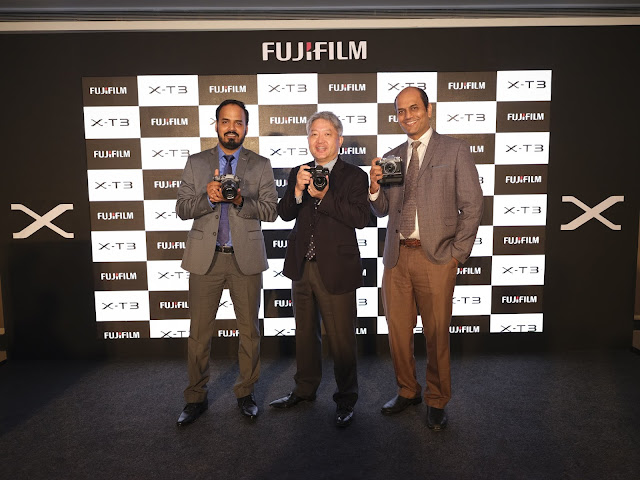 Fujifilm India Private Limited, a pioneer in imaging technologies, is delighted to announce the launch of its latest model X-T3 in the X Series mirrorless camera range, renowned for their unique color reproduction technology to deliver outstanding image quality in both stills and video. X-T3 is available in two stunning colors Black and Silver.

The X Series began with the 2011 release of X100 globally. The X-Pro1, released in 2012, became the first model to feature the X-Trans CMOS sensor, which uses a unique color filter array based on FUJIFILM’s extensive photographic expertise to achieve exceptional image-resolving performance and control of false colors at the same time, as well as the EXR Professor Pro image processing engine compatible with the sensor. For seven years, the X Series and its sensor – image processing engine combination have continued to evolve, with the company unveiling “X-Trans CMOS II” / “EXR Processor Pro II” in the X-T1, released in 2014, and “X-Trans CMOS III” / “X-Processor Pro” in the X-Pro2 and X-T2, released in 2016. The three generations of evolution have constantly advanced the X Series’ image quality and mobility.

Commenting on the occasion, Mr. Haruto Iwata, Managing Director, Fujifilm India Pvt. Ltd. said, “It is a proud moment for us to announce the much-awaited Fujifilm X-T3 mirrorless digital camera in the same year which marks our 10th anniversary in India. As we celebrate this success today, we are also gearing up for the next big leap towards new goals, one of which is to achieve 30% Market Share in the Indian Mirrorless Market in the next 3-4 Years. X-T3 is our step towards that endeavor and we at Fujifilm are confident that the new X-T3 will receive the same recognition and acceptance received by its predecessors. We strongly believe that in the next five years demand for mirrorless cameras will surpass that of DSLRs. We will continue to bring the best of technology and innovation to our consumers at the best possible price point.”

*1 X-TransTM is FUJIFILM Corporation’s trademark or registered trademark. The sensor has a unique non-periodic filter array to reduce the appearance of moire patterns and false colors without the use of an optical low-pass filter.
*2 Comparison with current models “FUJIFILM X-T2” and “FUJIFILM X-H1”
*3 Available only when using the electronic shutter

Use of the Series’ fourth-generation devices, new sensor “X-Trans CMOS 4” and new processor “X-Processor 4,” for the highest image resolving performance, color reproducibility and fastest processing in the history of the X Series

I haven’t any word to appreciate this post.....Really i am impressed from this post....the person who create this post it was a great human..thanks for shared this with us. Top 10 Mirrorless camera

Someone Sometimes with visits your blog regularly and recommended it in my experience to read as well. The way of writing is excellent and also the content is top-notch. Thanks for that insight you provide the readers! Mobile Games

I wanted to thank you for this great read!! I definitely enjoying every little bit of it I have you bookmarked to check out new stuff you post. Online Game