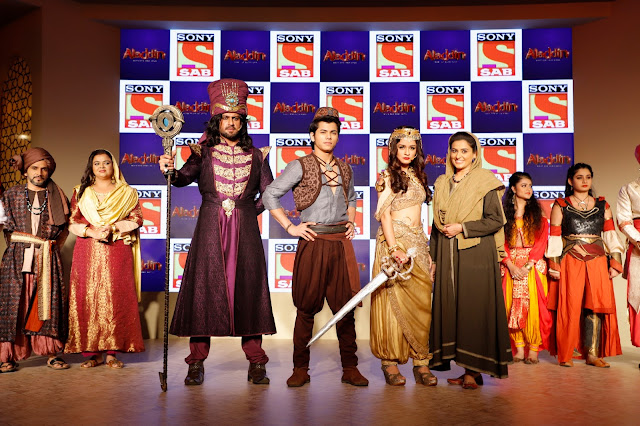 The mere mention of ‘Aladdin’ takes one back in time to the middle eastern era of lavish palaces and
vast deserts, flying carpets and the quest for the magic lamp. Sony SAB gears up to take viewers on an adventure with the launch of an epic, Aladdin: Naam Toh Suna Hoga. With a generous dose of magic and mystery, this show is based on the age-old fantasy of a 20-year old boy, Aladdin, and his trysts with love and fate. This show premieres on August 21, Monday to Friday at 9 PM only on Sony SAB.

Produced by Nissar Parvez and Alind Shrivastava of Peninsula Pictures, Sony SAB’s Aladdin will retell the legendary folklore in a grander avatar, action packed, yet amusing scenarios with a contemporary twist. The lion-hearted character of Aladdin is played by none other than Siddharth Nigam. He is a charismatic rebel who gets his work done promptly with his smooth-talking skills and street smartness. A lovable rogue and a hopeless romantic, Aladdin is forced to become a thief by his uncle and aunt owing to certain personal obligations and burdens of his family’s past. He shares a beautiful relationship with his Ammi played by Smita Bansal, who is his biggest strength as well as weakness.

Paired opposite Aladdin is Yasmine, the feisty princess of Baghdad, played by Avneet Kaur. Unlike a
stereotypical princess, Yasmine is a fighter, the first one to voice her opinion or challenge any wrong
doing. A pro at self-defense with excellent swordsmanship, Yasmine adds romance and action into the life of Aladdin. Another important character is that of Aladdin’s father, Omar (Girish Sachdev) who is at the crux of all the struggles that he’s been through and has a crucial role to play in Aladdin’s future and, a pathway to his bright future. The show will also bring alive popular peripheral characters on-screen such as, Zafar (Amir Dalvi), the power-hungry evil Wazir, who will constantly be at loggerheads with Aladdin, his thrifty Chacha (Badrul Islam) and Chachi (Gulfam Khan) and Yasmine’s parents Sultan Shahnawaz (Gyan Prakash) and Sultana (Yashu Dhiman). Aladdin’s adventures lead him to the ‘Chirag’, a magical lamp; this is the central motive on which the story revolves.

Neeraj Vyas, Business Head, Sony SAB, PAL, Hindi Movies and Music
“Aladdin is Sony SAB’s latest offering, keeping up the channel’s promise of providing happiness to its viewers. This show will bring to life Aladdin’s age-old yet always refreshing tale, dotted with
characters that we have been familiar with during our growing-up years. Aimed at setting new
standards of television programming, the show will entertain viewers with its grand sets, storytelling
with a contemporary twist and superior production quality. I am confident that Aladdin will soon
develop a loyal SAB fan following.”

Nissar Parvez, Co-Founder, Peninsula Pictures Pvt. Ltd. : “It is a privilege bringing to life the epic tale of Aladdin, the story we have all grown up listening to. To present a modern-day adaptation of the larger-than-life story, the largest and grandest show on television today - we have pooled all our strengths. An iconic story like Aladdin cannot be showcased any other way. We at Peninsula Pictures are glad to associate with Sony SAB for the same.”

Witness an extraordinary tale of an ordinary hero, tune in to Aladdin: Naam Toh Suna Hoga from
August 21, Monday to Friday at 9 PM only on Sony SAB

Launched in March 2005, SONY SAB is part of the network of television channels owned by Sony Pictures Networks India Pvt Ltd. With a mission to ‘flip every frown, upside down’, and a core brand proposition of ‘Haste Raho, India’, the channel strongly believes in spreading laughter and happiness. SONY SAB, with its impressive line-up of fresh programs and light-hearted content ranging from daily family comedy to path breaking concepts is dedicated to promoting an enjoyable ‘family-viewing’ experience. Its current programming mix includes Tenali Rama, Taarak Mehta Ka Ooltah Chashmah, Partners Trouble Ho Gayi Double, Sajjan Re Phir Jhoot Mat Bolo, Jijaji Chhat Per Hain etc. SAB launched its HD feed in 2016. The channel is broadcasted nationally and is available in more than 100 million households in India and internationally in more than 150 countries reaching over 25 million households. For more information, log on to: www.sabtv.com

The network is recognized as an employer of choice within and outside the media industry. SPN is a recipient of several awards, including the ‘Aon Best Employers India’ Award in the 2017 edition in recognition of SPN’s unique workplace culture and exceptional people practices, consistently ranking amongst India’s Top 10 Companies with Best Health & Wellness Practices by SHRM & CGP Partners, listed by Working Mother & AVTAR as one of the 100 Best Companies for Women in India in 2017 and adjudged one of India’s Great Mid-Size Workplaces for its distribution business by the Great Place To Work® Institute in the 2017 edition.