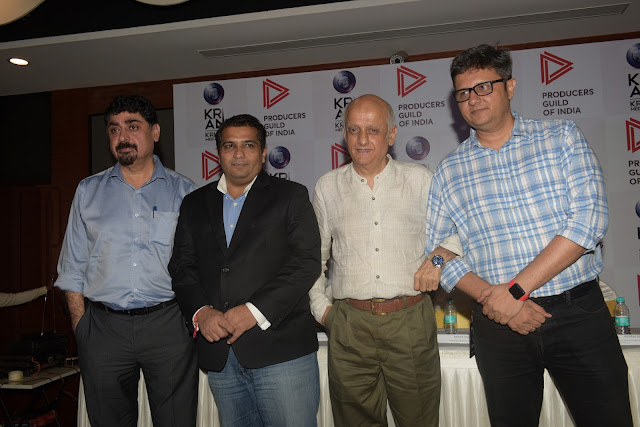 The move will encourage producers only to release their films in 2K format while the plan itself will largely benefit all stake holders in the business. First phase of 2,000 screens to cost about 390 crores.

Ranjit Thakur, the man who pioneered the 2K Digital Cinema Deployment concept in India is back again, though this time with a more meaningful, DCI Compliant Digital Cinema Deployment Plan that will change the course of how movies are released in India. The country has about 12,500 operational screens as on date out of which as many as 8,000 odds are using Non- DCI platform on which Hollywood does not play its films. The current framework of the entire system of digital cinema in India does not exactly benefit the exhibitors or the producers at large.

Krian Media through its new plan aims to eradicate the compete use of the Non-DCI platform in India getting it upto global DCI standards followed around the world thereby hugely increasing the footprint for the release of Hollywood films in India.

Ranjit Thakur, Founder & President of Krian Media states “There is a clear gap in the way digital cinema is positioned in India. The first objective is to bring it at par with the world DCI Compliant Standards. Our goal is to bring about equilibrium in the system by giving each stake holder its rightful benefit that digital cinema presents. While Producers should clearly benefit from the VPF, exhibitors should benefit by way of largely increased advertisement revenues and ownership of equipment. We completely respect the contracts that the existing integrators have with the cinemas. However just like water finds its own path, exhibitors will find a way to do what is right for their business.”

Mukesh Bhatt, former president and senior member of Producers Guild of India states that “We are happy to support initiatives such as these which can fuel growth of the industry. We keenly await Ranjit Thakur and Krian Media to unfold their digital cinema deployment strategy promising DCI compliant cinema projection in line with global quality standards and at the same time bringing VPF pay out under the sunset ambit as offered by digital integrators worldwide”

Neeraj Goswamy – Sr. Vice President Sales & Distribution at Viacom 18 Motion Pictures said “This is a much needed digital deployment plan that will benefit the entire film industry at large. Finally there is an end date of paying VPF for Hindi and Other local content. Congratulations to Krian Media for putting this deployment plan together"

The first phase of conversion of approximately 2,000 screens to the DCI Platform will cost Rs.390 crores. This is being funded by an angel investor as a combination of debt and equity. The debt is being secured though a VPF Lock Box in which all the VPF will be deposited. Post the repayment of the debt, Krian Media will have access to the overflow of funds generated out of the VPF. At the end of the VPF term, exhibitors would get to own their DCI equipment at virtually no cost and hugely benefit from the increased advertising revenues generated organically from the business. Krian Media will merely act as a consolidator for the advertisement business and will pass on 70% of the revenues generated back to the exhibitor. More importantly, it will work strategically with the exhibitors under its deployment plan to grow the advertisement pie. The flexibilities that digital cinema provides along with the growing DAVP revenues in time to come will be biggest growth factor for every exhibitor in India.

Sameer Joshi , Owner of Chandan Cinema , Mumbai said “Single Screen’s and Non Major Multiplexes will now get to own the DCI Equipment and also reap the benefit of the growing on screen advertising revenues on an annual basis.

Vinod Iyer, Partner of Crown Theatres, Calicut said “We hope that this plan from Krian Media will bring equilibrium to the ongoing issues in The South Indian Film Industry with respect to digital charges. I’m sure that the respective film chambers will find a way to work though the current hurdles and take advantage of the win - win business model launched today. For smaller group of Cinemas to be able to retain their advertising rights is a dream come true"

Krian Media Ltd (KML) is a cinema services company having presence in India, Middle East & North America. The company was formed in April 2012 by Ranjit Thakur, the man who pioneered the Digital Revolution in the exhibition space by aiming at 100% conversion of all cinema screens in the country to 2K Digital Cinema Platform. Allied businesses include new technologies like Virtual Sound Stages & IMAX Private Theatre.
Posted by SUJATA TAWDE at 6:24 AM