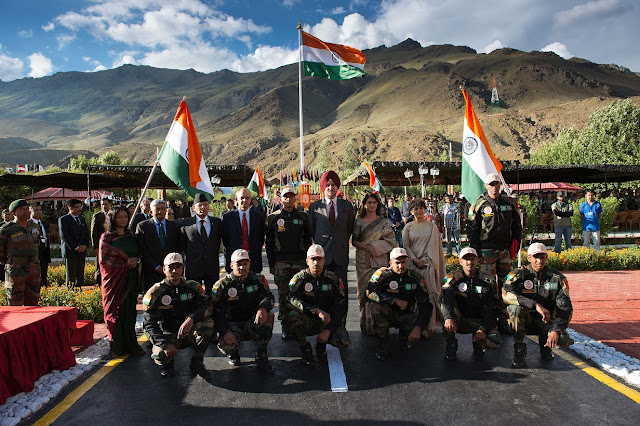 Dras, July 27, 2018: ‘Ride to Kargil’ a motorcycle expedition, organised by the Indian Army and supported by TVS Motor Company, successfully concluded in Dras, with five-member team of ‘Shwet Ashw’ reaching their final destination – Kargil War Memorial. ‘Shwet Ashw’ is the elite Motorcycle Display Team of the Corps of Military Police.

Lt. Gen Ranbir Singh, AVSM, YSM, SM, Goc-in-c, Northern Command flagged in the expedition on 25th July 2018 at Dras. The team then celebrated Kargil Vijay Diwas at the Kargil War Memorial with the families of martyrs and Kargil war heroes on 26th July 2018. The 20-day expedition from Bengaluru to Dras saw the riders cover a distance of 4250 kilometres across 8 states astride the TVS Apache RTR 200 FI 4V Race Edition 2.0.

Speaking on the expedition, Mr. Arun Siddharth, Vice President (Marketing), Premium Two-Wheelers, International Business & TVS Racing, said, “We are honoured that TVS Apache RTR 200 FI 4V Race Edition 2.0 was an integral part of this noble initiative by the Indian Army.  We want to thank them for giving us this opportunity to pay a tribute to the brave hearts on the special occasion of Kargil Vijay Diwas. The iconic ‘Shwet Ashw’ team has undergone tremendous challenges to reach Dras, battling torrid monsoons and difficult mountainous terrain.  It makes us proud that the TVS Apache RTR 200 FI 4V Race Edition 2.0 supported them across this and helped them reach the destination as planned.”

The ‘Shwet Ashw’ squad includes team leader Lt. Col Vikram Rajebhosale, Havaldar Jangar Ananda, Naik Shiva Krishna CH, Lance Naik Santosh MK and Lance Naik D Sashikant B. The team covered 11 cities on the way including Belgaum, Pune, Mumbai, Vadodara, Udaipur, Nasirabad, New Delhi, Chandigarh, Manali, Sarchu & Leh. The aim of the expedition was to strengthen the brotherhood, pay homage to the supreme sacrifices made by our martyrs during the Kargil War and enhance the image of the Indian Army to motivate the youth to join this elite organization.
Posted by SUJATA TAWDE at 4:17 AM

We offer a free plagiarism checker for everyone, but only https://urgentpaperwriter.com/ customers are treated to an absolutely flawless plagiarism detector we use to find even the shortest plagiarized sentences. Apart from the system itself, our editors check reports manually when there are some issues to eliminate all traces of possible copied phrases, even when the resemblance is superficial. Our regular clients know that when they buy essay, they receive 100% plagiarism-free essays. We won’t betray your trust; your assignment will be original from the first word to the last.