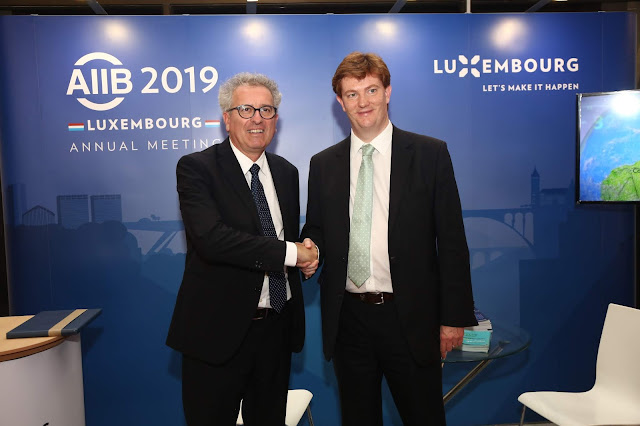 The Board of Governors of the Asian Infrastructure Investment Bank (AIIB) announced today that the Fourth AIIB Annual Meeting will be held in Luxembourg in July 2019.

Luxembourg is a founding member of AIIB as well as a leading international financial center and a facilitator of investments between Europe and Asia.

“We want to thank the Government and people of Luxembourg for offering to host our annual meeting,” said AIIB Vice President and Corporate Secretary Danny Alexander. “European countries have been strong supporters of the creation of the AIIB so it is particularly welcome to have this early opportunity to bring all of the Bank’s members to Europe. This will be a great opportunity for public and private sector representatives from around the world to discuss on infrastructure development in Asia and beyond.”

“Luxembourg is honored to become the first nonregional member of AIIB to host the bank’s Annual Meeting,” said Luxembourg Finance Minister Pierre Gramegna. “I welcome you all to Luxembourg City next year and making the 2019 event a great success.”

The first AIIB Board of Governors meeting was held in Beijing, China in 2016. The second was held in Jeju, Korea in 2017 and the third was held in Mumbai, India in 2018. The second Asian Infrastructure Forum will be held as part of the 2019 Annual Meeting.

The Asian Infrastructure Investment Bank (AIIB) is a multilateral development bank with a mission to improve social and economic outcomes in Asia and beyond. Headquartered in Beijing, we commenced operations in January 2016 and have now grown to 87 approved members from around the world. By investing in sustainable infrastructure and other productive sectors today, we will better connect people, services and markets that over time will impact the lives of billions and build a better future.
Posted by SUJATA TAWDE at 5:54 AM