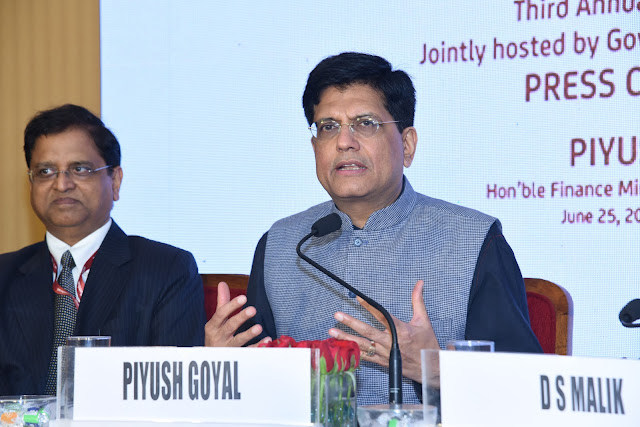 India is a sweet spot where the rule of law prevails to attract investments
India is looking forward to investments in 9 more projects from Asian Infrastructure Investment Bank after having picked up almost 28% of the bank’s total lending so far of US$1.4 billion for 7 projects, said Union Minister for Finance, Shri. Piyush Goyal addressing a press conference today during the Third Annual Meeting of the AIIB
Welcoming delegates from 86 countries, Shri Goyal pointed out that in just three short years, India has hosted three major events for international multilateral banks; the New Development Bank (NDB), African Development Bank (ADB) and now the Asian Infrastructure Investment Bank (AIIB) in quick succession.
Lauding AIIB for its robust processes, Shri Goyal said, ‘It is a matter of great pride that a concept that was floated in 2014 was able to mature in 6-7 months, and by 2015 we had a Multilateral Development Bank in place with India being the second largest stakeholder with over 8% stake.’
AIIB has focused its investment in India on lending to rural infrastructure, energy and power, environmental protection, transportation and telecommunication, water supply and sanitation and urban development and logistics and it is a matter of great pride that India is the largest recipient of the $4.2 billion funds disbursed by it, Shri Goyal said.
Attributing robust framework and easy to navigate policies being the key reasons for the investment flow into infrastructure in the country, Union Finance Minister said,” India is a sweet spot where the rule of law prevails to attract investments.”
Earlier participating in the panel discussion on ‘Mobilizing Finance for Infrastructure’, the Minister pointed out that integrity of people and process would decide the investment discourse.
The Minister mentioned that Mumbai as a city has improved its ranking in Swachhta Index significantly during the last few years and is engaging with international global efforts for better quality of life.
By 2022, the government as part of Prime Minister’s plan will ensure every citizen to have shelter on his head, 24x7 electricity, good toilet, clean drinking water, access by road to his house and internet connectivity, he said.
Industries Department, Government of Maharashtra is the nodal Department, Maharashtra Industrial Development Corporation (MIDC), Government of Maharashtra is the nodal agency, Confederation of Indian Industry (CII) is the Professional Conference Organiser (PCO), Research and Information Systems for Developing Countries (RIS) is the knowledge partner, for the third Annual Meeting of AIIB.
The Asian Infrastructure Investment Bank (AIIB) is a multilateral development bank with a mission to improve social and economic outcomes in Asia and beyond. Headquartered in Beijing, we commenced operations in January 2016 and have now grown to 86 approved members from around the world. By investing in sustainable infrastructure and other productive sectors today, we will better connect people, services and markets that over time will impact the lives of billions and build a better future.
Posted by SUJATA TAWDE at 7:05 PM