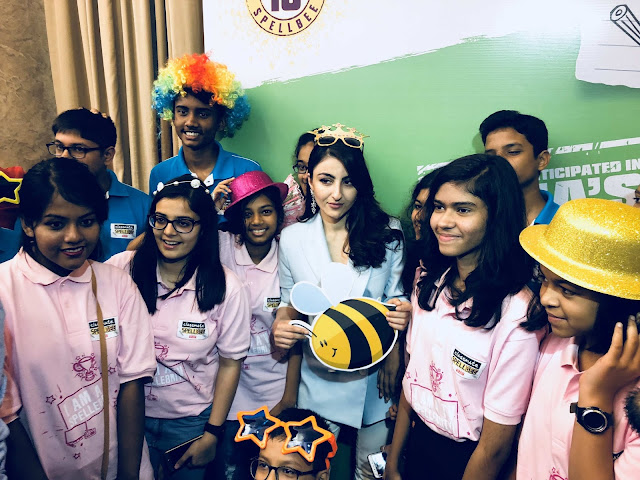 Classmate, India's No.1 Notebook Brand by ITC and Radio Mirchi’s spelling extravaganza Classmate Spell Bee Season 10 culminated today with an exhilarating finish as Soha Ali Khan announced Srija Mallipudi of Narayana IIT Olympiad School, Vijayawada as the National Champion of India’s largest spelling competition. Preetham R of Ryan International School, Kundalahalli, Bangalore was the first runner up. The theme for the contest this year is ‘Be Better than Yourself’ that encourages everyone to strive for continuous improvement. ‘. The competition this year was conducted across India and engaged with more than 3 lac students across 1000 schools in 30 cities by testing their mettle in English spellings.

In the initial phase, an on-ground exercise in schools received massive participation. The top 15 spellers from each school then competed in the online city finals round. The top performers from the city finals then competed in the Semi Final stage of the competition. From there only the top 16 students from across India went on to battle it out in the televised National Finals.

Mr. R Ravinarayanan, Head of Sales & Marketing, Education & Stationery Products Business (ESPB), ITC Ltd. said, "Classmate has always endeavored to recognize, nurture & celebrate the uniqueness of every child. Classmate Spell Bee Season 10 takes Classmate’s brand thought of celebrating uniqueness further as it gives students yet another opportunity to identify and showcase their distinctive talents and skills on a nationwide platform. Classmate Spell Bee season 10 builds on the scale we achieved last year with the aim of reaching out to even larger number students across schools and cities in India, through a school contact program coupled with a novel mobile app and a dedicated website to engage students. The brand promises to support a child’s dreams with an equally unique & world class set of stationery products like notebooks, writing, drawing, art and math instruments."

Mr. Mahesh Shetty, C.O.O., Entertainment Network (India) Limited said, “Every year Spell Bee is connecting more integrally with students, parents and teachers. Having started off as a spelling competition, it is today a landmark event that propagates the education of the English language at the highest level. It brings together some of the brightest children from across the country on one of the most credible edutainment based platforms. This year the competition has garnered participation from across 30 cities through our on-ground efforts to add to robust participation online. Like every year, the competition will be televised to encourage students to showcase their skills on a national platform and prepare for the upcoming season. What makes the competition special is the pride that participants take in participating in it and in making it what it has become today.”

Season 10 saw Classmate Spell Bee actively engaged with its consumers through a dedicated website. Classmate provided the Students with learning modules, tests, interactive blogs and contests to prepare for the event The focus this year has been to create a holistic educative experience for participants using a versatile mobile app and web based learning and practice solutions. Classmate believes in encouraging children to excel in the field of their choice by striving to continuously improve by competing with themselves and not with others and to be better than themselves.

Classmate Spell Bee serves to build the brand thought on ground, inspiring school students to identify and showcase their spelling skills by providing them with a unique platform to hone and showcase their language and spelling skills
The National Champion of Classmate Spell Bee Season 10 won a grand prize of Rs. 2,00,000/- apart from the opportunity to witness the prestigious Scripps National Spelling Bee 2018 with a parent in Washington D.C., U.S.A. in an all expenses paid trip. The 4 semi finalists won a cash prize of Rs. 50,000 each. The grand prize for the winner of Classmate Spell Bee and those for the semi-finalists have been specifically designed and sponsored by Classmate to help encourage and enable students to follow their hearts true calling.
The competition this year is powered by The Times of India, Times NIE is the education partner, Discovery Kids is the television partner and Victor Tango is the event partner for the property.

ITC made its entry to the education and stationery business with its Paperkraft brand in the office stationery segment in 2002; and later expanded into the popular student notebook segment with its Classmate brand in 2003. By 2007, Classmate became the largest Student Notebook brand in the country. Together, Classmate and Paperkraft offer a range of products in the Education & Stationery space to the quality seeking discerning consumer, providing unrivalled value in terms of product construction & price.

Classmate and Paperkraft have become a natural extension of consumers. Meticulous understanding of consumer needs helped create a relevant and comprehensive portfolio of stationery products created to the highest exacting standards of performance and safety satisfying the needs of different consumer sets.
Classmate’s portfolio today comprises of offerings spanning across notebooks, writing instruments including pens and pencils, scholastic products such as geometry boxes, scales, erasers and sharpeners, as well as Art Stationery such as Wax Crayons, Plastic Crayons, Sketch pens and Oil Pastels.

Entertainment Network India Limited (ENIL), popularly known as Mirchi, owns 73 frequencies and is advertising partner for another 3, across 63 cities, making it India’s largest private FM radio broadcaster. Launched in 2001, Mirchi now operates across the country with 3 distinct brands- Mirchi, Mirchi Love & Ishq (advertising partner of TV today network). With the highest listenership across the country and a track record of developing innovative content, Mirchi has been expanding and retaining its audiences and advertisers through the years.
Mirchi has delighted listeners and the industry with its exciting properties such as Mirchi Music Awards (in 8 languages) & Mirchi Top 20. Mirchi is also the biggest concert player in the country. Mirchi’s initial foray into digital space has helped it gain a strong position- 21 online radio stations, biggest radio website & biggest on Facebook, Twitter & Youtube. Mirchi was also the 1st Indian brand to go international with the launch of the brand in the UAE. Mirchi can also be heard at T3 international airport, Delhi and for the 1st time on Indian railways on Kalka Shatabdi. With such a wide presence, on -air, on-ground & on digital, Mirchi is truly everywhere.