Reebok celebrates Women Strength and Spirit at the #FitToFightAwards 2.0 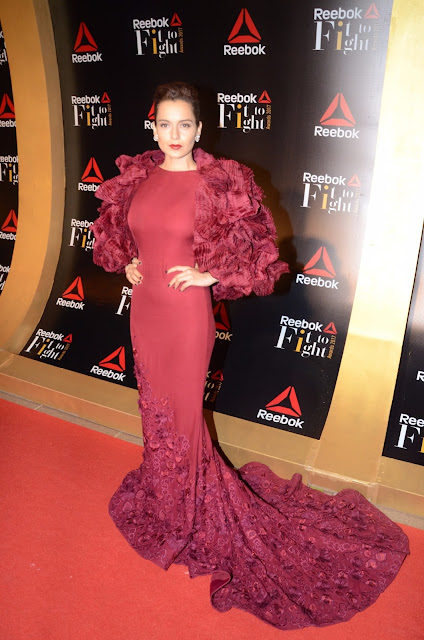 Reebok Felicitates women achievers at the Awards ceremony in Mumbai, celebrating the overarching theme ‘Girl’sDon’t Fight’
In association with Beti Bachao, Beti Padhao, the Flagship Program of the Ministry of Women’s and Child Development and the Kailash Satyarthi Foundation
The gala evening saw the presence of renowned personalities including Reebok Brand Ambassadors Kangana Ranaut and Shahid Kapoor, along with Fashionably Fit Reebok Ambassador Malaika Arora and the Hon’ble Minister of State Dr. Virendra Kumar, Ministry of Women & Child Development as Guest of Honor 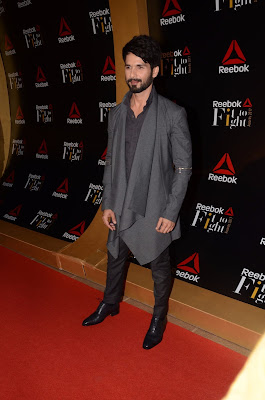 Bringing an evening of inspiring stories of courage and determination to the city, Reebok India celebrated the second edition of the #FitToFight Awards at Taj Lands End today. The #FitToFight Awards are an extension of Reebok’s #FitToFight campaign, that propagates the belief that fitness brings out the best in each one of us, and is not just physical, but also social and mental. To celebrate the power of women, Reebok introduced its #FitToFight campaign last year, with brand ambassador Kangana Ranaut as the face of the campaign, to inspire women to be strong willed and indomitable when faced with challenges. It was a unanimous call to applaud real life women heroes who have fought with grit and spirit to achieve their mark across fields. 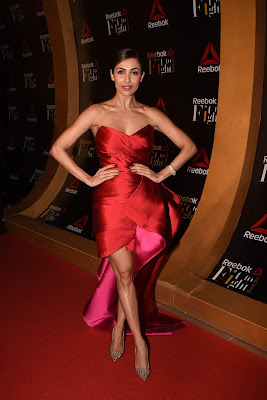 Raising the bar this edition, the fitness brand launched the second edition of #FitToFight in September this year, with another compelling narrative and ‘Girls Don’t Fight’ as the overarching theme. Exploring a deeper cultural context of the need for women to fight the wrong, Girls Don’t Fight espouses the cause of the ordinary woman battling strong, prevalent social issues. The word‘fight’ is not only a literal depiction but a call to action for those who will not accept the way things are, making it the slogan for all ‘women’ heroes. The brand launched two powerful films that put a spotlight on eve teasing and inequality in pay, in September and October this year, showing Kangana Ranaut playing the mentor and the inner strength in every woman, beckoning the female protagonists to fight and beat the odds. Receiving nationwide appreciation, the films garnered over 25 million views from the audience and continues to create buzz across platforms.

The #FitToFight campaign culminated in the Awards held in proud association with Beti Bachao, Beti Padhao, the Flagship Program of the Ministry of Women’s and Child Development and the Kailash Satyarthi Children Foundation. Reebok believes that education can empower young girls to become Fit to Fight and shares the vision of the Beti Bachao, Beti Padhao initiative with complete passion and conviction. Reebok also believes that the future of our nation lies in our children and we should do all we can to support them, enrich their lives and enable them to fulfill their destiny, and salutes the un-paralleled work done by Noble Peace Prize Laureate Kailash Satyarthi in this regard.

The second edition of the #FitToFightAwards campaign received over 500 inspiring entries, and the awards ceremony saw the presence of renowned Bollywood celebrities, eminent dignitaries, fashion designers and stylists, socialites, including Reebok brand ambassadors Kangana Ranaut and Shahid Kapoor. Shahid Kapoor recently joined Reebok as the brand ambassador and will be carrying the #FitToFight mantle forward being a strong believer in women’s equality and empowerment. Both Kangana and Shahid inspired and regaled the audience with their real-life experiences and affirmed that physical, social and mental fitness can overcome all obstacles.

Commenting on the second edition of the #FitToFightAwards, Ms. Silvia Tallon, Senior Marketing Director, Reebok India, said, “This is our second year in running and the initiative has received an overwhelming response from women across the country. Through this campaign, not only have we found these heroes, but we have also inspired millions of women to come out and share stories of their battles with each other and given fitness a much larger dimension. We salute all the awardees tonight who have faced obstacles, come out and shared their stories, and continue to be an inspiration to millions.”

The event also witnessed Reebok’s association with The Kailash Satyarthi Children’s Foundation wherein the brand lauded the efforts of the organization in championing children’s rights through a model of education and rehabilitation. Commenting on the association, Noble Peace Prize Laureate Kailash Satyarthi said, “At The Kailash Satyarthi Children’s Foundation our aim is to create a free, safe and healthy environment for children. A platform like Reebok #FitToFight empowers women and celebrates their endeavor and ability to fight all odds to achieve success and we want to imbibe the same values in children from a young age.”

Commenting on the association, Union Cabinet Minister for Women and Child Development, Smt. Maneka Gandhi said, “We are glad to partner with a brand like Reebok that believes in the importance of empowering women and enables us to spread further awareness around women’s welfare. The women chosen by Reebok have displayed exemplary courage and determination and it’s great to see a fitness brand take on a larger role in the society and inspire others”

Reebok #FitToFightAwards facilitated 12 women and 4 young girls from The Kailash Satyarthi Children’s Foundation, celebrating their trials and tribulations. The evening also saw the presence of prominent names including Malaika Arora, RJ Malishka (awardee), designer Masaba Gupta (awardee) among many others.  Beginning with a performance by sand art maestro Nitish Bharti, the event also saw well-known stand-up comedian Aditi Mittal perform, amongst other highlights of the evening.

Sharing her excitement at the event, Kangana Ranaut, Brand Ambassador, Reebok India said, “I have been immensely inspired by the stories of all the women present today. This year Reebok took a focused approach with ‘Girls Don’t Fight’, enabling women to challenge biases such as eve-teasing and inequality in pay. The campaign has grown from strength to strength, inspiring every woman to be #FitToFight.”

Commenting on the campaign and Awards evening, Shahid Kapoor, Brand Ambassador, Reebok India said, “This is my first time at the Reebok #FitToFightAwards and I think it’s is an extremely powerful and inspiring platform. Reebok defines fitness beyond the physical, emphasizing mental toughness and I personally relate to it. As a Reebok ambassador, I want to make it my personal mission to make fitness cool, desirable and a stepping stone to a better life.”

The first phase of #FitToFight received an overwhelming response where over 100 women across the country shared their personal stories of strength and courage. The campaign culminated with the first #FitToFightAwards evening in December last year, where Reebok and Kangana felicitated 12 women that included Indian athlete Deepa Malik and stunt woman Geeta Tandon whose extraordinary feats inspired the audience.