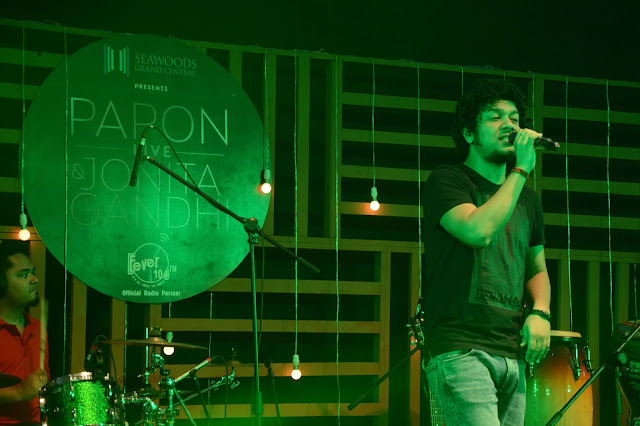 Navi Mumbai saw the first-of-its-kind LIVE and UNPLUGGED event at the recently opened Seawoods Grand Central Mall. Well-known singers and internet sensations, Papon and Jonita Gandhi, captivated and engaged with the audience in an incredible manner. Never before has Navi Mumbai experienced a musical evening as grand as this within the premises of the mall. The audience got a chance to hear Papon perform on Moh Moh ke Dhaage, Bulleya, Humnava etc, whereas Jonita presented her renditions of Samjhavan, Tum Hi Ho, London thumakda and several more.

On the occasion Mr. Nishank Joshi, Chief Marketing Officer, Nexus Malls said; “We take great pleasure in coming with idea's that could create great experiences. As a part of the process, we chose to give Navi Mumbaikars an in-mall experience that could transform their perception about what could be done at a mall. An Unplugged event with Papon & Jonita Gandhi is one such attempt. Music has always been one such binding force and with the luxury of having an atrium of this size, I am certain that we will give Navi Mumbaikars a new reason to be coming to malls.”

Seawoods Grand Central (SGC) Mall, located at Navi Mumbai, is a part of Nexus Group of Malls. Nexus Malls is a fully owned subsidiary of the Blackstone Group, world’s leading Private Equity firm.
Seawoods Grand Central Mall is a project conceptualized by L&T and the retail space was bought by the Blackstone Group. The sprawling 40-acre mall is destined to be epicenter of the city with its renowned retail havens, multiplex’s and F&B options making it a complete family entertainment center. Anchor stores like Big Bazar and Lifestyle greet the commuters at the exit of the station, thus bringing in a whole new consumer experience of convenience fashioned with grandeur. The 3 floored mall has 160 retail stores with several fine dining restaurants and a food court to house 1200 people. The mall has a parking capacity of 2800 cars.

Nexus Malls is a fully owned subsidiary of world’s leading investment firm Blackstone Group. Through this entity, Blackstone Group marks its foray into India’s retailing sector with an aim to transform the shopping experience of the Indian consumers. The new entity will own and manage shopping centres with a focus on identifying, evaluating, buying and adding value to the assets that they acquire in the country.

Nexus Malls have already acquired and is in the process of completing the transformation for the AlphaOne Malls in Ahmedabad and Amritsar and are also in advanced stages of discussion with several other developers for potential acquisitions in the near future. Nexus also acquired Seawoods Grand Central Mall in Navi Mumbai which is India’s first Transit Oriented Development.

Nexus Malls seeks to implement best practices and state-of-the-art technology in India by bringing in professional and broader mall management in the country.  It also aims to aid its retail partners to compete effectively and cater to the omnipresent needs of the consumers in India.