Fantástico is a Spanish word for 'Fantastic'. Fantástico is used when something is REALLY great. Just like this lavish, grand bouquet #madeofgreat beauty. 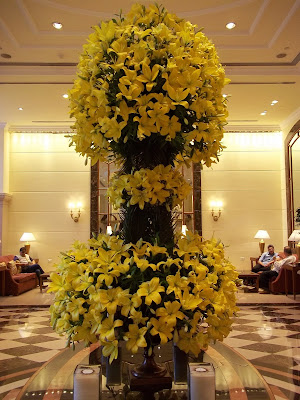 Dudes and Dolls, I am sure all of you are Dressed up and raring to enjoy #ValentineFever.  But ...  are you really, truly, totally Decked up for the D-day?.

Are you sure, you are Smelling Sweet and not Sweat?. Worry not. Oriflame has launched two Fantastico perfumes just for you Two , 'So Fever Her' and 'So Fever Him'. You can check them out here ... Oriflame Website , Oriflame Twitter , Oriflame Facebook and buy only after reading this Fantastico review. 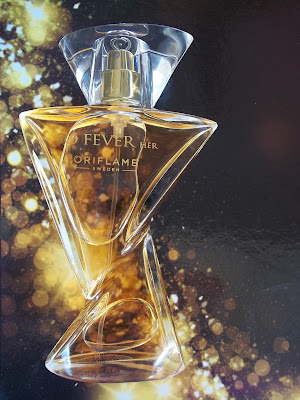 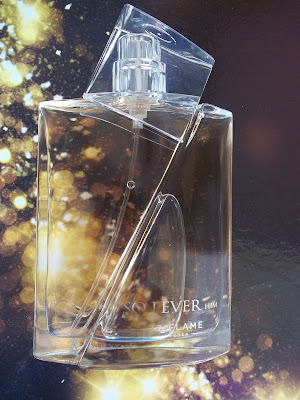 What I love the most about Oriflame is their Fantastico packaging. First impression counts and how! Trust me and see it with your own eyes, smell it with your own noses .... sorry kidding.
Here... The sturdy, white outer box, the bubble wrap ( which I and my nephew Aamen always share to pop the bubbles ) and most importantly the jacket sleeve ... every nuance of packaging is so so elegantly designed that I did not feel like tearing it apart. I opened up this Fantastico Gift very lovingly and tenderly. Did I hear, "Gift ?... from whom ?". Well ... keep guessing. 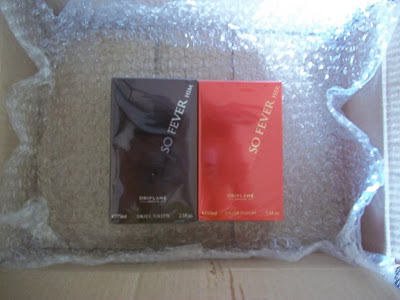 Since ages, even in the times of Mahabharata, fragrance, scent, essence has always played a Fantistico role in the romance. Satyavati was the queen of the king Shantanu  of Hastinapur. She was the great-grandmother of the Pandava and Kaurava princes ( principal characters of the Hindu epic Mahabharata ). Satyavati was the mother of the Maharishi Vyasa , author of the epic Mahabharata. Her story appears in the Mahabharata as well as in  the Harivamsha and Devi Bhagavata Purana.
Satyavati was the daughter of the Chedi king Vasu (also known as Uparichara Vasu) and a cursed apsara (celestial nymph)-turned-fish Adrika. Satyavati was brought up as a commoner – the adopted daughter of a fisherman-chieftain Dusharaj (who was also a ferryman) on the banks of the river  Yamuna . Quite naturally as brought up in a fishing community, she smelled of fish. Due to the smell emanating from her body she was known as Matsyagandha ("She who has the smell of fish"). Satyavati aka Matsyagandha helped her father in his job as a ferryman. 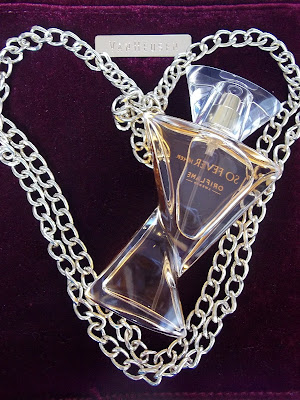 As a young woman Satyavati met the wandering  rishi  (sage) Parashara, who fathered her son Vyasa out of wedlock. The sage blessed her with a musky fragrance, which earned her names like Yojanagandha ( an young girl, whose fragrance is spread for a  yojana (8-9 miles)") and Gandhavati ( a fragrant girl). Later King Shantanu, mesmerized, allured by Satyavati's Fantastico fragrance and beauty, fell in love with her. That's the power of Fantastico Fragrance, perfume. 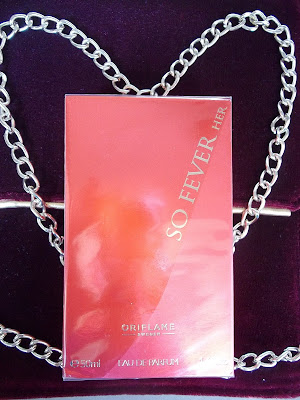 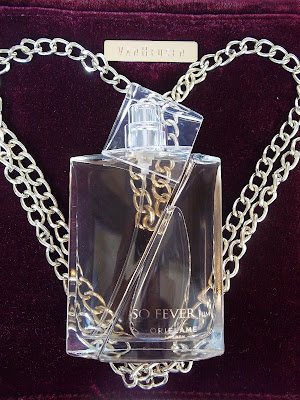 ORIFLAME launched the new Fantastico fragrant #ValentineFever duo named SO FEVER HIM and SO FEVER HER. The new fragrances are available in seductively shaped crystal-glass. It is time now for you to take control, check your boundaries and make your wildest fantasies come true with fragrances So Fever!.
Fragrance for women So Fever Her eau de parfum is ... A provocative fragrance that teases the skin with a seductive blend of crisp blackcurrant, sultry sweet sandalwood and untamed Ginger Flower, enveloping the wearer in a fiery warmth. A playful and sexy scent that pushes the boundaries of passion and intensity.as an oriental-vanilla EDP with rich ingredients. The perfumer of the edition for women is Vincent Schaller.
INGREDIENTS :ALCOHOL DENAT., AQUA, PARFUM, BENZYL SALICYLATE, PEG-40 HYDROGENATED CASTOR OIL, BUTYLPHENYL METHYLPROPIONAL, LIMONENE, ALPHA-ISOMETHYL IONONE, GERANIOL, HYDROXYCITRONELLAL, LINALOOL, COUMARIN, ISOEUGENOL, BENZYL BENZOATE, CITRONELLOL, CITRAL, PHENOXYETHANOL, CI 19140, CI 16035
Price : INR 1499 , Size : 50 ml

So Fever Him Eau  de toilette by Oriflame is a .... A  magnetically masculine fragrance with an intensity and character that reflects a bold man with a passionate nature. A tempting blend of pure eroticism dresses the skin with piri piri pimento, geranium bourbon and fiery Ginger Wood - an intoxicating composition. It's a Woody Spicy fragrance for men. The nose behind this fragrance is Christiane Plos.

#TataZicaMarathon
This blog post is inspired by the blogging marathon hosted on IndiBlogger for the launch of the #Fantastico Zica from Tata Motors. You can  apply for a test drive of the hatchback Zica today.

Email ThisBlogThis!Share to TwitterShare to FacebookShare to Pinterest
Labels: #madeofgreat, #TataZicaMarathon, #ValentineFever, Fantastico, Gift, Oriflame, So Fever Her, So Fever Him

The content on your web site never confuses me. Keep it up!!
Fat Oud Parashin

Castor oil is one of the best hair growth oil which can also be used for eyelashes,eyebrow growth and many more. The best part about castor oil is that it is 100% organic and free of chemicals and any sort of preservatives.

Hello, you used to write wonderful, but the last several posts have been kinda boring¡K I miss your tremendous writings. Past few posts are just a bit out of track! come on!
vatika hair oil