Exchange of cultural and spiritual ideas* 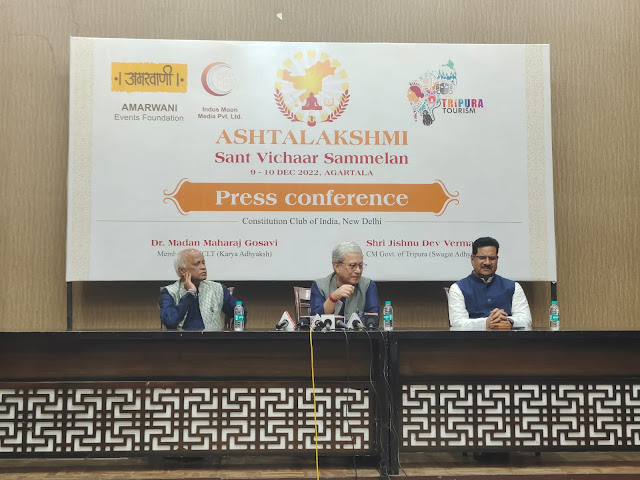 There may be different religions and sects in the world but the Jagadguru or saint of that religion and sect always teaches everyone the principle of the same. They keep saying love each other and help each other. So that different saint poets can be organized on a single platform. Here is everything to know about the Ashtalakshmi Sant Vichar Sammelan to be held on 9th and 10th December 2022 in Agartala, Tripura.

It is an attempt to recognise, celebrate and micro-communicate the eternal, indigenous and folk tales of seven north-eastern states of India and Sikkim in the form of written literature. Gatherings are organized to express themselves through oral tradition or even through music, dance or theatrical forms.

Just as Maharashtra benefited from Saint Dnyaneshwar, similarly North Purvanchal can be called the talent of Dhani Shankardev. The Bhakti movement gained momentum in the then Kamrup region with Srimanta Madhavdev under his patronage. Ashtalakshmi Sant Vichar Sammelan aims at a two-way introduction to take these similarities to a wider audience.

The contribution of freedom fighters in the Indian freedom struggle is also mentioned in our great history. From Rani Gaidinliu and Haipau Jadonang to Veer Tikendrajit Singh and many others who fought locally as well as more direct struggles on the mainland, the history of modern India is incomplete without mention of the heroes of the Northeast.

From modern classical to ancient history, Kamrup region is a symbol of Indian culture. Honorable Prime Minister of India Shri. Narendra Modi conferred the title of Ashtalakshmi to the northeastern states of Arunachal Pradesh, Assam, Manipur, Meghalaya, Mizoram, Sikkim and Tripura. This included both the number of kingdoms and the tradition of worshiping the goddess.

Ashtalakshmi Sant Vichar Sammelan is the first of its kind in the North East region of India. Its concept and objective is not only to explore the rich cultural and religious traditions of the region but also to strengthen communication and exchange with the rest of the country, thus creating a strong and unified national identity.

In the 75th year of Indian Independence, this program will be a humble tribute to the anniversaries of Independence. To enhance our own personal understanding of the Northeast region of India, its differences with the rest of the country.Lectures and seminars are organized on various topics to celebrate and share with each other the great thread of imagination of Indian culture that has defined this land for centuries. Also, the North-Eastern States Some programs have been organized to introduce the traditional culture. Mahant of Shanti Kali Mandir and senior thinker Shri Chitta Maharaj will be honored with the Lifetime Achievement Award on the occasion.

The brief schedule of the program is as follows:

Session I - Spiritual Traditions and Practices in the North Eastern States of India.

Session II Tracing the Traditional Roots of the North-Eastern States of India - History of Yogic, Tantric and Medical Traditions.

Session 4 - Students from neighboring countries will present a view of their eternal roots.

Session 5 - Challenging the Beliefs and Traditions of North East India.

In this program, Dr. Agartala, Saureesh Devbarman, Mr. Sandeepji Kavishwar of Kalyan Ashram, Prof. Manipur Tribal University. Lectures by eminent personalities like Sukhdeba Sharma, Gangadhar Krishnan from Bengaluru, Dr. Sriram Narenswamy from Mumbai, Rami Niranjan Desai from Ahmedabad, Prafulla Ketkar from Delhi etc. have been organized. Ashtalakshmi Sant Vichar Sammelan was the first world Sant Sahitya Sammelan.It was held in Kolhapur, Maharashtra in April. The Deputy Chief Minister of Tripura, Shri Jishnu Dev Verma was present in the meeting. Keeping in mind the unprecedented enthusiasm received from this meeting and the views expressed by various intellectuals, Shri Jishnu Dev Verma ji also thought of organizing such a meeting in the North East region and on his initiative this meeting is now being held at Agartala in December.

North Eastern states like other parts of our country have produced many saints and writers. He has done a great job of bringing universalism in the society. Tripura's Deputy Chief Minister Jishnu Dev Verma said that, we are organizing Ashtalakshmi Sant Vichar Sammelan in Tripura, so that other parts of the country also get to know about the literature of this saint.He further said that, despite many invasions on India before independence, the rich cultural traditions and heritage of our India have survived. Also, the purpose of this meeting is to inform people from other parts of India that there are many temples and places of worship in the North Eastern states.

*Conference in Tripura will be successful: Dr. Gosavi*