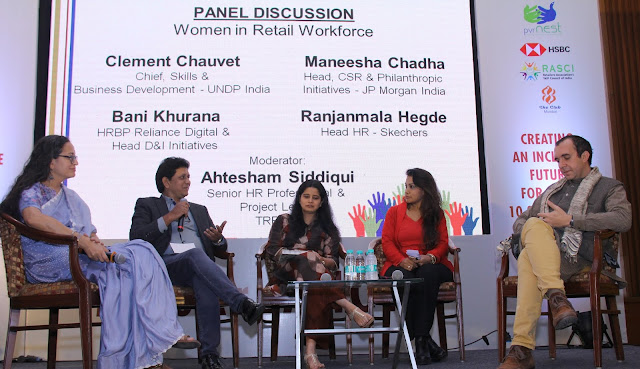 Trust for Retailers & Retail Associates of India (TRRAIN), in association with HSBC, today announced the release of their report on disability employment titled ‘Disability Employment: Indian Retail Changing Equations’. This report makes a strong case for the retail industry to be the flag bearer of employment for PwDs. It was released during the 3rd edition of its Retail Inclusion Summit aimed at driving an impetus towards making India's corporates more diverse and inclusive.

According to the India census 2011, the number of Persons with Disabilities (PwD) in India is 26.8 million or 2.21% of the total population. The report brings to light some startling statistics pertaining to the PwD population in India.
•        It states that the actual number of PwD in India is between 5-10% of the total population, as against the 2.21% put forth in the 2011 census
•        Interestingly, around 50% of PwD population in India is in the employable age group (20-59 years). However, lack of education is a hindrance to employability as around 46% of the PwD population in India is uneducated
•        While 36% of India’s PwD are employed, they are mostly (around 90%) employed in the unorganized sector
•        Furthermore, the report finds that mainstreaming PwD can add around 5-7% to India’s Gross Domestic Product (GDP)
•        It is encouraging that hiring of PwD in the retail sector has gone up by 53% between 2011-18. However, there is enhanced scope for the retail industry in India to employ and mainstream PwD as the report establishes a positive correlation between customers and stores manned by PWD

Given that around 80% of jobs in the retail sector are customer facing, employing PwD serves the dual purpose of:
•        Providing employment to them
•        Sensitising the larger society about the challenges faced by PwD

Importantly, it underscores how PwD can contribute to economic growth as well as societal development if provided the right opportunities. With this in mind, the ‘Disability Employment: Indian Retail Changing Equations’ report provides a consolidated list of strategies and recommendations for the government and retail companies to train and employ persons with disabilities.

“We know that ‘inclusive development’ and accessibility is a genuine challenge. 64% of the persons with disability are unemployed, as compared to an average 9% unemployment rate for the rest of the population,” said BS Nagesh, Founder TRRAIN, offering perspective on the challenge at hand. TRRAIN runs an initiative titled PANKH, which aims to train people with disabilities and provide them with employment opportunities in the retail industry.

Commenting on the report, Surendra Rosha, CEO, HSBC, said, “Since 2016, we have supported 13 organisations working with PwDs that have trained over 1,800 youth and placed 1,130 of them. However, we will not stop here. Our partners have highlighted the need for an ecosystem building approach and have conveyed the urgency of investing in data, insights and frameworks that will enable a greater number of employers to hire PwD’s. The partnership with TRRAIN, a leading organisation in skilling PwD’s in the retail sector, is, therefore, an important one. With this report, it is our endeavour to bring skills development and placements for PwDs to the forefront of the employability agenda.”

The day-long programme had an opening plenary featuring BS Nagesh as moderator for a session with Surendra Rosha and Sadashiv Nayak on why service sector must bring inclusion in the workplace.

“1 in 15 persons have a disability. So when we create employment we are actually touching 15 households and telling them be carefree. We are creating consumption from 7% of the population and making the brand feel good which is a win-win situation. PwDs have done well in the customer facing as well as the back end jobs,” said Sadashiv Nayak, Business Head, Big Bazaar.

Topics such as cultivating inclusion into a company’s culture, women in retail workforce and technology as an enabler for inclusion were discussed through the day.

“The Retail Inclusion Summit organised by TRRAIN has done a fantastic job so far in building a high level of awareness around inclusion and having the corporate sector engaged and involved. It’s time to take the game to the next level, where instead of just reaching out to include people we enable them with special abilities. Organisations must focus on PwD’s ability, attitude and output,” said Jamshed Daboo, MD, Trent Hypermarket Pvt. Ltd.

The launch of India’s first quiet hour- an initiative started globally for shoppers on the autism spectrum who struggle due to music and noise, was overseen by Vineet Saraiwala, Inclusion Lead at Big Bazaar and Sonali Saini, SOL’s Arc.