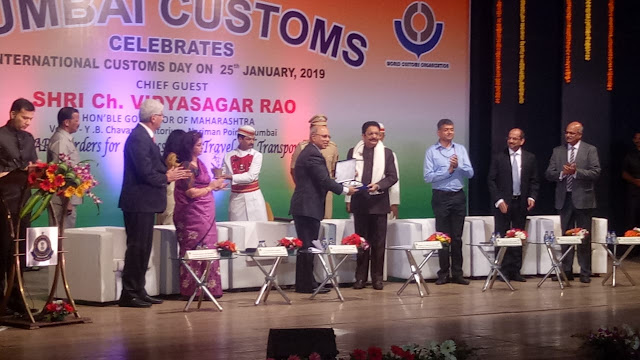 The Governor of Maharashtra, His Excellency Vidyasagar Rao, has said that Customs Officers in the country play a very critical role in the process of Nation Development. The challenges that the Customs Officers face in their day to day work has only increased over the years. Facilitating Trade, simplifying, standardising and harmonising flows of human and material across border can be made simpler with the adoption of technology. He said this while addressing the Customs Officers on the
Occasion of International Customs Day celebrated on 26th January every year. Chief Commissioner Zone 1 Shri B. Bhattacharya and Chief Commissioner Zone 3 Shri Himanshu Gupta were also present during the occasion.

Speaking on the occasion, the Governor appreciated the role played by Mumbai Customs and congratulated them on being a very efficient force in handling by far the largest passenger volume in the country. He also acknowledged the revenue collections done by Mumbai Customs which constituted more than third of the customs revenues collected across the entire country.

Speaking further, the Governor appreciated the efforts made by the CBIC and Mumbai Customs in facilitating trade as a result of which, India ranking in Trading Across Borders has improved from 146 to 80. This, helps India in its pursuit to improve rankings in the Ease of Doing Business.

I am told that, currently India is the Vice-Chair or the regional head of the Asia Pacific Region of the World Customs Organization (WCO) for a period of two years from July 2018 to June 2020. India had the privilege of hosting the 80th Policy Commission Meeting in Mumbai from 3rd to 5th December, 2018. Such an intergovernmental meeting of WCO was held in India the last time more than a decade ago. The Honorable Union Finance Minister Shri. Arun Jaitley had addressed the delegates via video-conferencing. The Secretary General of WCO along with other top-officials of WCO and customs delegations from more than 30 countries had taken part in discussions on various matters related to international trade and cooperation.

This included discussions on Strategic Plan (2019-2022) of WCO to carry forward their work on trade facilitation, revenue collection, capacity building & protection of society. There was also discussion on methods to curb the menace of illicit financial flows, including Trade Based Money Laundering. I would like to congratulate CBIC and Mumbai Customs Zone 1 for their dedication and commitment in conducting such a major international event so successfully in India and in Mumbai.
The convention establishing Customs Co-operation Council was signed on December 15, 1950 in Brussels, entered into force two years later. The official inaugural session of the Council was however held on January 26, 1953 with 17 countries participating. The Customs Co-operation Council got its present day name – World Customs Organisation (WCO) in 1994 and today the body is 182 members strong. To mark the first session of the Customs Co-operation Council, worldwide this day is celebrated as the International Customs Day. WCO adopts a theme for this occasion every year. WCO is dedicating 2019 to the swift and smooth cross-border movement of goods, people and means of transport, with the slogan “SMART borders for seamless Trade, Travel and Transport.”
Posted by SUJATA TAWDE at 3:37 AM