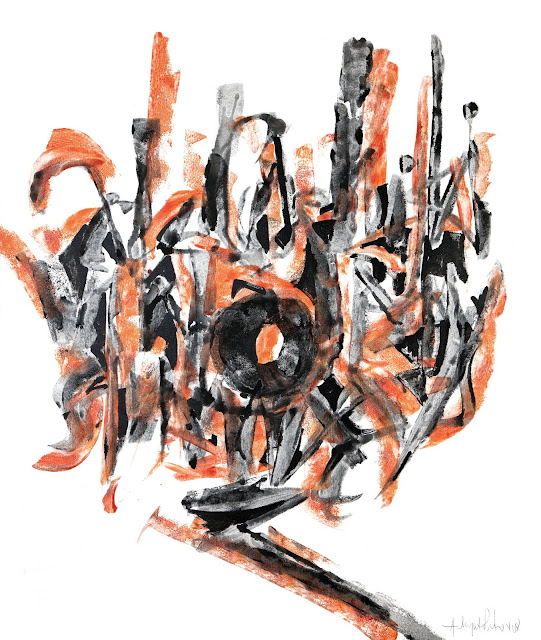 India is not only agricultural country but also the country known for many scripts- Achyut Palav
Noted cartoonist and Maharashtra Navnirman Sena President Raj Thackeray inaugurated the exhibition of depicting four-decade-old calligraphic journey of Achyut Palav, credited with making calligraphy known in India and abroad, and also released his book  “‘Letterospective” in English at Jehangir Art Gallery, Kalaghoda at Fort in South Mumbai. Besides Thackeray and Palav, Anil Gala of Navneet Publications was present.

The exhibition begins with calligraphic painting showing Suvichar”(good thoughts) and it ends with calligraphic painting of zero. The boards, banners, hoardings, nameplates, paper, canvass, walls of interior can be seen in this exhibition. Besides the documents, coins and tools received while studying Modi” language (an ancient variation of the Devanagari) are on display in the exhibition.India is not only agricultural country but is known also for its many scripts.

With a view to expose the creative and artistic form of these scripts and to ensure dialogues, the “Boru Akasharayan” (an optical character recognition engine for Indian languages using “Boru”(wooden writing instrument) was created. With an aim to expose visitors to different Indian and global scripts, a focus is on “Aksharyan 2020”. For this, 13 feet tall “3 D Boru” has been created and traditional “Borus” have been branded as “Aksharyan” and linked to main scripts (Devnagari, Gurumukhi, Gujarathi, Kannada, Telugu, Malyalam, Urdu, Bengali)
The exhibition shows the beginning of this art form in India, its progress till now not only in India and abroad and the people’s response.

While speaking about Achyut Palav’s four-decade-old calligraphic journey Raj Thackeray said that “I have seen his four decade old journey from close quarter. Today whatever he is, is because of his efforts and consistency. The work he has done till now is unparalleled. The work done on computer cannot be compared with the work done by hand. The original is original”. Thackeray gave him well wishes for his future endeavours. He also said that “my hand writing is good and credit for that goes to my father and uncle Balasaheb Thackeray. Even by grandfather used to sign in “Modi” language.

Achyut Palav said that the exhibition has been organised to make people known my four-decade-old journey in calligraphic. The intention behind the release of book “‘Letterospective” is that it should be useful to future generation. The artists should introduce variety in work and reach it up to people. I always try to do this and make attempt to do new experiments in calligraphy. I have presented calligraphy with a fusion of music, dance, rain and wind. The calligraphy gave me recognition not only in India but also abroad. I would like to advise present generation that the success is not easy and constant efforts are needed to achieve success. The success is assured if one works with dedication. India is not only agricultural country but is also known for its many scripts.

Palav’s journey with calligraphy began when Parel’s Dr Shirodkar High school entrusted him the responsibility to write “Suvichar” (Best Thoughts) on the school board in 1973. As the days advanced, “Calligraphy” became more matured and he was credited with taking calligraphy to a broader spectrum of people in India and abroad. In 40 years span from 1973 to 2019, he created different letterings, scripts in different mediums. He founded “Achyut Palav School of Calligraphy” and also organised several editions of “Callifest”, the festival which gives a forum to calligraphists. He also began felicitating the calligraphers with “Callihunt” award.

Till now he has published over 10 books related to the calligraphy. Several countries including Netherlands, Germany, London, China, Dubai, Algeria, Korea, France and Russia, have taken note of his workshops, lectures and demonstrations.

The exhibition will be open for all between 11 AM and 7 PM till 27 January 2020 at Jehangir Art Gallery, Kalaghoda. Besides, there will be live demonstration by Achyut Palav between 11 AM and 11.30 AM on 26 January, Republic Day.
Posted by SUJATA TAWDE at 4:32 AM