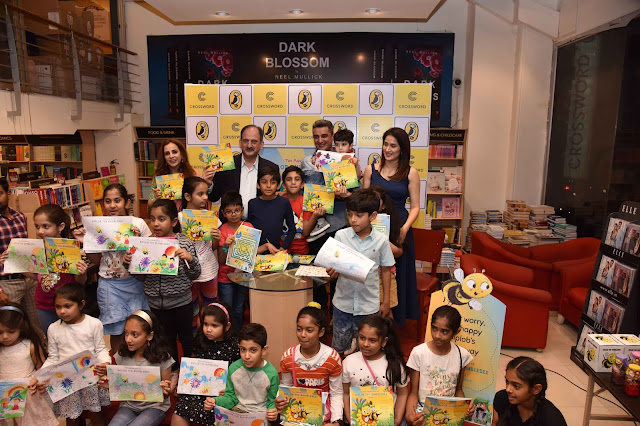 
The book has been illustrated by Sonal Goyal. Entertaining and interacting with the kids, Preeti Vyas, Founder, FunOkPlease, along with the author Abhishek Talwar read out a few pages from the book.
Sportsperson, model, and award winning actress Sagarika Ghatge and gynaecologist Dr. Nozer Sheriar, were part of the panel discussion along with the author. Role models, the importance of reading early on, and the character of Biplob the Bumblebee were discussed by the panelists.
Talking about his reading preferences Zaheer Khan said, “I like quick reads, Abhishek Talwar’s book The Adventures of Biplob the Bumblebee is easy to read and tells us a lot about values.”
An entrepreneur and father, Talwar said, “It all started with me explaining different complicated science concepts with the same characters in story form to my kids. They became so interesting and easy to recollect, I had to write them down. I am writing several stories at the moment- one with Chef Jerry as the protagonist, another is called Rakshasas of Bharat and I write travelogues as well.”
Speaking about building role models Sagarika Ghatge said, “I think it is important to learn from stories about values of friendships. I believe that’s how role models are built. Not by exposing kids to several role models at a time but learning from the characters in a story”


The Adventures of Biplob the Bumblebee consists of three short stories. The protagonist Biplob, inculcates love for nature and how to conserve it and has a simple narrative explaining the concepts of pollination, rainwater harvesting and natural pesticides through colourful illustrations.


The vibrantly illustrated stories promise to teach kids something new through lessons on science and friendship.


Dr. Nozer Sheriar siad, “Reading and storytelling gives us a chance to visualise objects and scenarios with our own imagination. Quite different from the digitised part of the world. In fact, Crossword has been a hideout for me when I am at the hospital waiting for someone to come out into this world.”
Posted by SUJATA TAWDE at 8:13 AM