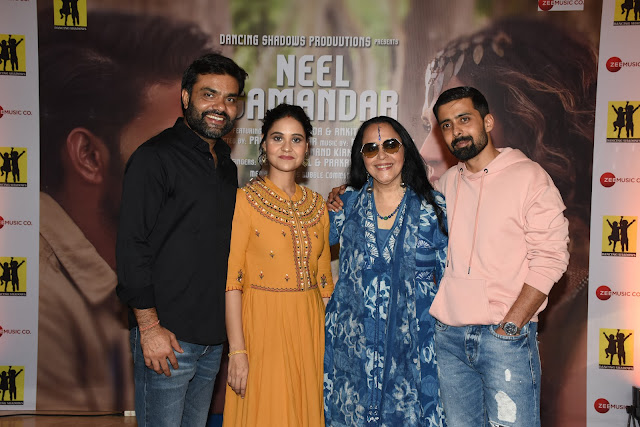 Dancing Shadows Productions launched its much awaited music video named ‘Neel Samandar’. For the first time in Hindi film industry, a complete video has been shot in the serene locations of Andaman Islands and is inspired by a true story, that took place between the protected tribes of Andaman & Nicobar Islands & a tourist. The video is Directed by National Award winning Director Pradeep Sarkar and written by National Award winner Lyricist Swanand Kirkire. Featuring Actor Richa Chadda and debutant Ankit D’souza, a fresh face.

The event started with a soulful performance by Pandit Rattan Mohan Sharma and followed by performance by Benny Dayal and Prakriti Kakar. This was then followed by unveiling the look and showcasing the video to all dignitaries and members of media fraternity.

Produced by Actor turned Producer Rahul Bagga  and former Journalist Isha S Kumar, the Vocals are by Benny Dayal who has given many hits like ‘Badtameez Dil’,’ The Disco Song’,’ Pappu Can’t Dance’ and renowned singer Prakriti Kakkar who has sung songs like ‘Hawa Hawa’, ‘Katra Katra’ and ‘Gazab ka hain din’ .

The soulful music has been composed by Meet Brothers, popular youngsters who have a high rate of commercial success for the original music composed and Director of Photography by Sylvester Fonseca who has high regard in the entertainment industry for creating visual magic on screen and choreographed by renowned Ranju Varghese.

National Award winner Director Pradeep Sarkar, expressed his excitement saying, “Neel Samandar is a first of its kind in so many ways and I have enjoyed this entire process of creating this as right from adventurous recce to shooting the entire video in Andamans, it was a completely new experience for me and this being a first, the creative excellence that we achieved with the virgin locales of Andamans was magnanimous.”

Swanand Kirkire whose lyrics has adorned this music video said  “Lyrics are the soul of any song and specially when it I was told the video is based on a love story of a tribal girl and a photographer, the process of writing it was more challenging, yet more interesting.”

Meet Brothers who have composed this soulful creation said   “We are honored to be working with two National Award winning talents in one video and when it comes to conceptualizing music for a romantic plot, it becomes all the more special.”

Isha S Kumar who is debuting with this music video as a producer said  “Neel Samandar is very special for us as Producers as we achieved many firsts with this project. First time a complete project is filmed in Andamans and first time Richa Chadha has played a tribal in her career.”

Rahul Bagga who after a successful stint in acting is exploring the field of production with Neel Samandar, said “Our aim was to make Neel Samandar a cinematic experience for the viewers and all the crew and talent that came together to shoot it in Andamans. We ensured we provided all the required production amenities in order to make a never seen before video, which shall be remembered for its shooting locales and the concept too.”
Posted by SUJATA TAWDE at 3:25 AM