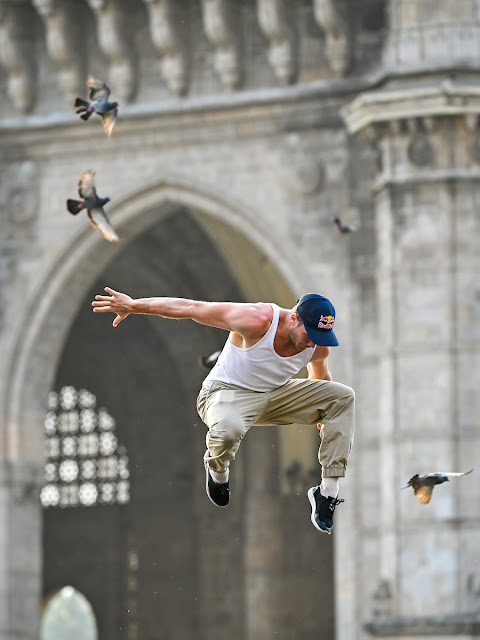 August 2022, India: Mesmerized by the hustle and bustle of Mumbai, legendary German freerunner and Red Bull Athlete Jason Paul came down to the city to embark on a new adventure. The free runner had an array of options to choose from for his next escapade. However, impressed by the work ethic & efficiency of the Mumbai Dabbawalas, Jason decided to pay homage to them and the city by creating a freestyle video in association with Red Bull India.

In the captivating video, Jason Paul takes on the role of a tiffin delivery person carrying a lunchbox to be delivered by “parkour”ing his way through iconic locations in Mumbai like Gateway of India, Dhobi Ghaat, Churchgate Station, Dharavi rooftops, Sassoon Dock and more amid the traffic jams and challenges faced by the Dabbawalas. Watch it now on RED BULL YOUTUBE

On what about Mumbai city fascinates him, Jason Paul said, “I visited Mumbai for the first time 10 year ago for work and was staying in Juhu then. I flew to Mumbai last year for a recce to see the possible locations for the shoot. For me it was very surprising to see bamboo scaffolding. In Europe the scaffolding is made of metal, and it is very uniform, so it becomes kind of repetitive. Also, there are things like the rickshaws that are very unique to India. I was in Mumbai in April for 10-11 days for the final shoot. I love the city. At first look, it seems chaotic and easy to get lost in. But when you spend some time here you realise there is a system, and because of the space crunch things are quite minimalistic. Every location is like a mini city in itself, they have a supermarket, a barber shop, a pharmacy etc. The cool thing about Mumbai is that there are some places, like Ballard Pier, where you get these great big roads and European architecture. On the other hand, you have crowded alleys, and buildings or structures which are not always at the proper angle.

As a parkour athlete, it is fun to just take everything in and think of the possibilities. It’s like once you learn to read; your brain automatically does it. So, when I go somewhere, I am always thinking about what I could do, maybe do a wall run, how do I go from here to there?”

About the Dabbawalas and spending time with them, Jason adds, “I didn’t know about the Dabbawalas before this. It is very interesting that they deliver everything on time. In big cities, no one is ever on time, you’ll see people coming 30 minutes, one hour late. But they deliver everything on time, even though one lunch box gets passed from one person to another so many times. It is also amazing to me that it has been passed on from one generation to the next. Usually, you can understand if someone develops an interest in it, is very good at it and gives it a go. But to pass it on to the younger generation and have them care just as much is incredible. We went to their main office, to talk to them, to understand how the system works, how long it takes them to train people. As a parkour athlete, I can somewhat relate to them, because in their day-to-day life they go from one point to another and overcome obstacles on the way. Parkour is also a lot about problem-solving on the go.”

Legendary German freerunner Jason Paul now spends his time travelling the world, turning cities into playgrounds. Jason’s fascination for his sport is still as vibrant today as it was back in 2005 when he first caught the free-running bug. One day, his best friend came round clutching a video tape that, unbeknownst to him, would change Jason’s life forever. That tape was a documentary on Parkour. From that day on, Jason saw the world in a new light – rooftops suddenly became pathways and obstacles became opportunities.

In recent years, the Red Bull athlete has continued to be the star of a series of video edits, such as Arcade Run, Dreamland, Running Illusions, Last Call for Mr Paul, Freeze Running, Running Reverse and 2020 Wild Phone Chase, as well as Jason Paul Goes Back in Time.