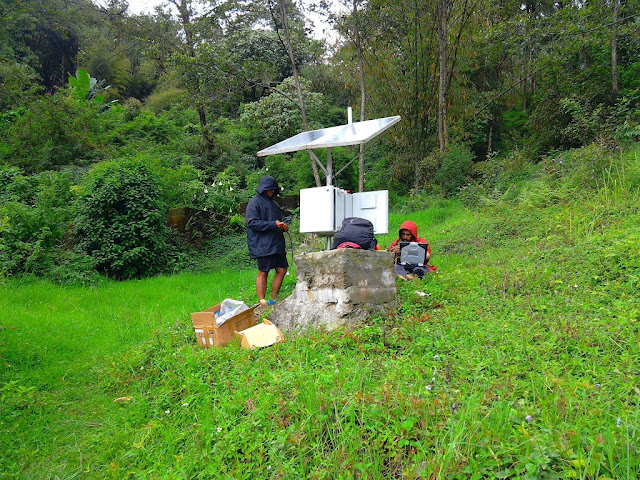 ●        At the 5th World Landslide Forum in Kyoto, Japan, the International Programme on Landslides (IPL) awarded the title in recognition of the University’s contribution towards landslide risk reduction

●        Amrita University has successfully deployed the world's first wireless sensor network system which was later upgraded to the AI integrated Internet of Things (IoT) system for detection and early warning of landslides in Western Ghats and Himalayas, the two major global landslide hotspots.

Mumbai, 19 November 2021: For the second time in a row, Amrita Vishwa Vidyapeetham has been conferred the title of "World Centre of Excellence on Landslide Risk Reduction (WCoEs)" by the International Programme on Landslides (IPL). The re-election is a testament to the University’s groundbreaking work on detection and early warning of landslides. The University will hold the title till 2023.

The title was conferred at the 5th World Landslide Forum held in Kyoto, Japan on 2-6 November 2021. Amrita Vishwa Vidyapeetham, which has held this title since 2017 is among 19 WCoE’s globally. The University has successfully deployed the world’s first wireless sensor network system which was later upgraded to the AI integrated Internet of Things (IoT) system for detection and early warning of landslides in Munnar, Kerala. At the request of the Government of India, Amrita has also deployed a similar system in Sikkim, Northeast Himalayas. This applied research, with significant global value for all landslide-prone areas, was directly initiated by the University Chancellor, Mata Amritanandamayi Devi to develop low-cost technologies for wide-area monitoring of landslides, to save human life.

Dr. Maneesha Sudheer, Provost, Amrita Vishwa Vidyapeetham and Professor & Director, Amrita Center for Wireless Networks and Applications, who heads landslide research, said, “It is a matter of pride for Amrita Vishwa VIdyapeetham to be re-elected as a World Centre of Excellence. It motivates us to improve our capabilities in partnership with other globally renowned centres to develop solutions for building national and community scale landslide disaster risk reduction. With the ever-increasing frequency of landslides, we hope to build on our end-to-end systems for real-time monitoring, detection, and early warning of landslides in India to prevent fatalities, and build community scale landslide resilience. The University is also working on developing a comprehensive framework for community level landslide risk reduction and resilience, which includes landslide hazard mapping, remote sensing, low-cost sensing, big-data analytics, and decision models.”

The vision of the "World Centre of Excellence on Landslide Risk Reduction (WCoEs)" is “Disaster Risk Reduction Through Real-Time Landslide Monitoring and Early Warning Systems Integrated with Co-designing and Community Engagement Programs”.  The sub objectives of the WCoE will include:

(b)    Development of IoT Framework for Large Scale Monitoring of Landslides

Amrita Vishwa Vidyapeetham has partnered with several international landslide research experts such as CNR, Italy, UK Met Office, the British Geological Society, and KCL in a landslide-research project, to develop regional thresholds for landslide warning from the real-time data of AMRITA’s field deployment in the Himalayas and the Western Ghats. This project titled LANDSLIP engages the community in providing an integrated early warning system to reduce the landslide risk. The University successfully deployed the world’s first wireless sensor network system which was later upgraded to an Internet of Things (IoT) system for detection and early warning of landslides in Munnar, Kerala in 2009. The system is capable of issuing both regional and site specific warnings. Since deployment, the system has issued multiple advanced landslide warnings, in the years 2009, 2011, 2013, 2018, 2019, 2020, and 2021. The communities in danger were evacuated by the Government after the warnings and the landslides that happened in the Munnar area validates the warnings. These warnings have essentially become a lifeline for the region, during the torrential rains that lash throughout the state. Impressed by the success story, in 2015 in collaboration with the Government of India, Amrita developed a similar system for the Sikkim Himalayan region which is very active geologically and is vulnerable to rainfall-induced landslides. The IoT system in Sikkim is deployed in collaboration with the Sikkim State Disaster Management Authority and is being co-funded by the Ministry of Earth Sciences, Govt. of India.

Landslides rank as the third most deadly natural disaster, with $400 billion being spent annually worldwide for landslide disaster management. Thousands die every year from landslides. In India, the frequency of landslides has increased. Data suggests that over 12% of the land area in India is susceptible to landslides. The major landslide-prone areas in India include the Western Ghats and Konkan hills (Tamil Nadu, Kerala, Karnataka, Goa, and Maharashtra); Eastern Ghats (Araku region in Andhra Pradesh); North East Himalayas (Darjeeling and Sikkim), and North West Himalayas (Uttarakhand, Himachal Pradesh, and Jammu & Kashmir).

The IoT (Internet of Things) based system developed by Amrita Vishwa Vidyapeetham for Early Warning of landslides is specifically tailored to the Himalayan terrain. The system consists of over 200 sensors that measure various hydrological, meteorological, and geophysical parameters like rainfall, pore pressure, and seismic activity. The system monitors a densely populated area spread across 150 acres around the Chandmari village in Sikkim’s Gangtok district. The system collects real-time continuous data from the deployed sensors, performs first-level analysis and assessment at the Field Management Centre located in Sikkim and then the data is relayed to the Data Management Centre at Amrita Vishwa Vidyapeetham. To enhance the system’s reliability and enhance the advanced alert capabilities, a 3 level Landslide Early Warning Model has been developed by university researchers.

About International Program on Landslides

The International Consortium on Landslides (ICL), with a Secretariat in Kyoto, Japan, was created in 2002 as an international non-governmental and non-profit scientific organization. The International Programme on Landslides (IPL) is a joint program established by the ICL, five United Nations organizations related to landslides and global NGOs in the field of science and engineering. This initiative is a part of the United Nations International Strategy for Disaster Reduction. The activities of IPL include sponsoring projects worldwide, identification and coordination of World Centres of Excellence on Landslide Risk Reduction, and organizing a World Landslide Forum every three years.

Amrita Vishwa Vidyapeetham is a multi-campus, multidisciplinary Institution of Eminence accredited by NAAC.

Amrita Vishwa Vidyapeetham (www.amrita.edu) is a very young University (18 years of age) growing at a rapid pace in terms of its research and academic programs. Today we are ranked in the Top 100 universities in the World for its Impact as per THE 2021 Impact Rankings) (www.amrita.edu/rankings). In India, as per the National Institute Ranking Framework (NIRF), we are ranked as the 4th best university amongst all public and private universities. Recently we were also the youngest University in India to be accredited with the highest grade of A++ by National Accreditation Council (NAAC), Government of India

Amrita partners with academic, industry and governmental institutions across the world to accomplish human-centered, translational, and groundbreaking research. To date, Amrita has more than 500 collaborations from more than 200 signed Memorandums of Understanding (MoUs). Some of Amrita’s partners include Harvard University, Columbia University, King’s College London, KTH - Royal Institute of Technology, VU Amsterdam, the British Geological Society, University of Oxford, Italian National Research Council, Deakin University, and the University of Tokyo. Sri Mata Amritanandamayi Devi (Amma), a world-renowned humanitarian leader is the founder, Chancellor, and guiding light of Amrita Vishwa Vidyapeetham. Amma’s words, thoughts, and vision for education and research have shaped the university’s mission and vision.