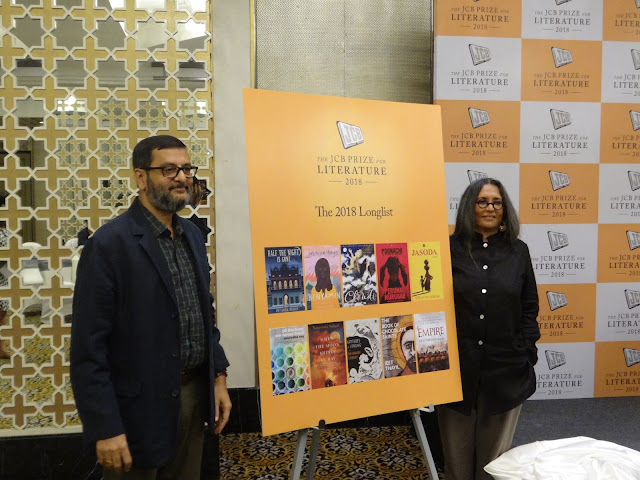 The inaugural JCB Prize for Literature today announced the ten most distinguished novels of the year, as selected by the jury.  The award, launched earlier this year, was open to entries till May 31, 2018. After months of reading and evaluation, the jury presented a longlist which displays the great diversity of contemporary literature by Indian writers.

Of these ten books, the jury will go on to select a shortlist of five, which will be announced on October 3. The final award – India’s richest, at Rs 25 lakhs – will be presented to the writer of the winning novel on October 27. The five shortlisted writers each receive Rs 1 lakh.  If the winning work is a translation, the translator receives an additional Rs 5 lakh.

The first edition of the Prize received an overwhelming response to the call for submissions. Entries came from writers in nineteen states; 22% of these were translations into English from seven other Indian languages: Assamese, Hindi, Kannada, Malayalam, Oriya, Tamil and Telegu. 35% of entries were written by women authors. Each entry was read by the judging panel consisting of: award-winning film director Deepa Mehta (Chair), entrepreneur and scholar Rohan Murthy, Yale University astrophysicist and writer Priyamvada Natarajan, novelist Vivek Shanbhag, and author and translator Arshia Sattar.

The 2018 JCB Prize for Literature longlist:

Two of these novels are translations: Poonachi or The Story of a Black Goat was written in Tamil and translated by N. Kalyan Raman, who has made much contemporary Tamil poetry and fiction accessible in English. Jasmine Days was originally written in by Malayalam by Benyamin, also known as Benny Daniel, and translated by Shahnaz Habib, a poet and writer based in the United States.

“We all read every single entry to the Prize – more than fifteen thousand pages in all – which gave us a fascinating sense of the enormous diversity of Indian writing today.  We read books by writers from nineteen states, who wrote in eight languages about every conceivable subject.  We noted the strong attention to Indian history and mythology, an increasing focus on themes of land, water and ecology, and some interesting experiments in genres such as science fiction.  We look forward to seeing these trends evolve in literary fiction in the coming years.

“The ten books we chose for the shortlist stood out because of their powerful storytelling and their unique view of the world.  They are imaginative, deeply observed books, sometimes magical, often humorous.  We felt they displayed a deep sympathy with human beings and society, and that they would continue to be read long into the future.
“Writers are often the first to describe the impact of external forces – politics, technology, etc – on inner lives.  The long-listed books capture this perfectly.  They describe how it feels to live in our complex and turbulent world, and they offer compelling stories and metaphors to help us understand and navigate it better.”
Commenting on the longlist for 2018, Rana Dasgupta, Literary Director, said:

“The Prize exists to celebrate distinguished fiction by Indian writers.  This longlist is a true celebration – of the diversity and scope of contemporary Indian literature.  I’m particularly happy that there are two very powerful translations on this list, and two debut authors too.  I hope the Prize will help readers in India and around the world discover just how vibrant and ambitious are the novels being written here today.”
***
Jury comments about the longlisted books-
Half the Night is Gone
“Amitabha Bagchi’s novel explores the inner and outer lives of the men in two families, one rich, one working class. It gently but perceptively explores their vanities and their failures, and the deeply-rooted passions that drive to make the choices that they do.  Half the Night is Gone demonstrates a deep understanding of masculinity and will surely be read for decades to come.”
All the Lives We Never Lived
“This beautiful novel, set in the southeast Asia of the 1930s, evokes beautiful imagery of places and landscapes.  It does its work quietly and with great subtlety, but it is a novel of big ideas.”
Jasmine Days
“Through the life of a young protagonist, Jasmine Days describes the lives of foreign workers in a Middle East country on the brink of a revolution.  Beautifully written and translated, this compassionate and morally complex novel confronts some of the difficult questions of our times.”
Clouds
“There is lovely writing in this beguiling novel.  These extremely inventive, enmeshed stories explore the multiple realities lived by so many Indians today.  The myth-making surrounding the Cloud people of rural Odisha, and their clash with the mining establishment, is particularly memorable.”
Empire
“This intriguing tale of the capture and assimilation of a young Greek woman into the court of the Cholas in the 11th century is striking for its amazing narrative power.  This is historical fiction at its best.”
The Book of Chocolate Saints
“Through the travels of its fascinating protagonist, Newton Francis Xavier, The Book of Chocolate Saints opens a vast world of poetry and politics. Ambitious in scope and uninhibited in its prose, Thayil's novel takes a vivid journey through several different milieus: 1950s Soho, 1970s Mumbai and modern Delhi.”
Jasoda
“This is a moving account of the epic journey of a woman through many wrenching obstacles: patriarchy, poverty and feudalism.  A very upsetting and moving novel – one that ultimately celebrates female resolve and resilience.”
When the Moon Shines by Day
“A courageous, and dystopian, political novel, When the Moon Shines by Day describes the all-too-easy slip from the familiar and apparently harmless into the terrifying.  This is a true novel of our time: India, 2018.”
Poonachi
“Funny and warm, Poonachi is a book that forces us gently to look at ourselves and our contribution to an unequal world.  Perumal Murugan is a master story-teller who reflects profoundly on our transactional society and its inequities and struggles.  Through the character of the lonely goat, he has written a powerful modern fable.”
Latitudes of Longing
“Lyrical, original and heart-breaking, Latitudes of Longing is a vast novel.  In order to write in such detail about so many locations, the author obviously had to do a great amount of research, and yet it has the ring of total authenticity.  A wonderful book which, with landscape, earth and sea as principal characters, seemed to invent a genre all of its own: ecological fiction.”
***
To know more about The JCB Prize for Literature, please visit: www.thejcbprize.org
To stay up to date with exciting news on the literary space, follow us:

ABOUT THE JCB PRIZE FOR LITERATURE

Instated in the year 2018, The JCB Prize for Literature is an initiative by JCB India Ltd, India’s leading manufacturer of earthmoving and construction equipment. The prize aims to enhance the prestige of literary achievement in India and create greater visibility for contemporary Indian writing. With a special focus on translation, it intends to introduce readers to many works of Indian literature in languages other than their own. Under the guidance of the Literary Director, Rana Dasgupta, each year, a jury of distinguished individuals with different expertise will be appointed to ensure a fair and fresh decision-making process. The five-member jury will be entrusted with the responsibility to select the longlist of ten, the shortlist of five, and the winner. Poised to become one of the most prestigious annual awards, one author will be recognised and honoured with a prize money of Rs. 25 lakhs. The five shortlisted writers will also receive monetary support to encourage contemporary writing. In case the winning work is a translation, the translator will also be rewarded.  The jury of 2018 consists of: award-winning film director Deepa Mehta (Chair), Yale University astrophysicist and writer Priyamvada Natarajan, prominent novelist, Vivek Shanbhag, and author and translator, Arshia Sattar.
Key Dates for 2018
The announcement of the shortlist for the prize: October 3, 2018
The announcement of the winner of The JCB Prize for Literature: October 27, 2018
About the JCB Literature Foundation
The purpose of the JCB Literature Foundation is to promote the art of literature in India.  The Foundation was set up by JCB, which has had a substantial and long-standing involvement in India’s social and economic life, to create an enduring cultural legacy in the country.  In promoting the art of literature, the JCB Literature Foundation focuses on the following goals: enhancing the prestige and the commercial success of contemporary Indian literature, fostering translation between Indian languages, and introducing readers to Indian writing in languages other than their own.  The principal activity of the Foundation is to administer the JCB Prize for Literature.

About JCB
JCB is a leading global manufacturer of earthmoving and construction equipment and has been active in India since 1979. Through its subsidiary, JCB India Ltd, the UK company today employs 5,000 people in India, and operates five state-of-the-art factories: in Ballabgarh (near New Delhi), in Pune, and in Jaipur. Products made in these factories have been exported to more than 93 countries around the world. Over its journey of close to four decades in India, JCB, through its products has contributed significantly towards the development of Infrastructure in the country. JCB is committed to CSR with a focus on communities around its factories in India and today its outreach extends to 54 Government schools and nine vocational training centres through which it reaches out to 16,000 students and trainees.
Posted by SUJATA TAWDE at 4:22 AM

Empire sounds interesting as I like Greek mythology and literature. The others too undoubtedly will be great reads

I don't know why... But my name doesn't appear there. Also I don't see a twitter share button. It only shows G+.
This is @srisrirajraj on twitter