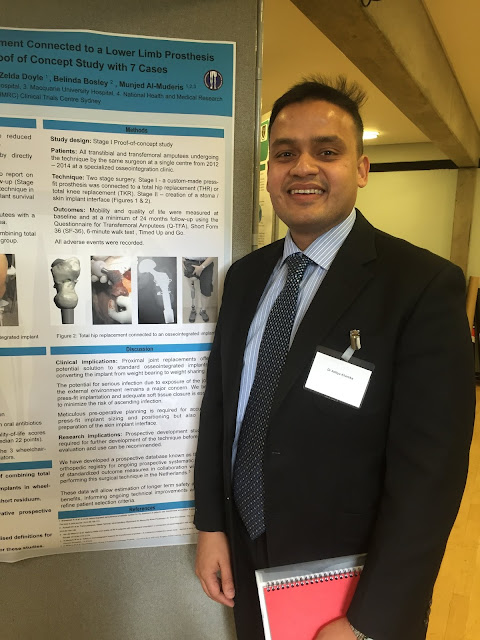 Renowned Orthopedic Surgeon Dr. Aditya Khemka, plans to set up a centre of excellence for osseointegration in India at Hinduja Healthcare Surgical, Khar. Through this surgery Dr. Aditya Khemka and The Osseointegration Group of Australia provide above and below knee amputees with a leg replacement using the OGAP-OPL implant which is designed to be as close to the human anatomy as possible. The surgery involves an implant being inserted into an amputee’s femur which, when integrated with the bone allows for a simple, quick, safe connection between the stump and the lower prosthesis. Osseointegration surgery provides amputees with greater mobility, comfort and quality of life.

The moment an individual loses a part of the leg, their mobility is severely affected. Artificial legs or prosthesis, such as the Jaipur foot have been a revelation in improving the ability of these individuals to mobilise. The last three decades have seen the development of newer prosthetic components enabling amputees to mobilise better. But contrasting to this progress is the lack of novelty in the socket/sleeve used to attach these components to the body. It is precisely this that is crucial for the functioning of the prosthesis. The result of high-tech components lost by an unstable and uncomfortable confirmation. As a majority of these patients using a socket suffer from multiple problems of rashes, ulcers, excessive perspiration, pistoning, diurnal variations and excessive amount of time taken to don and doff.

The typical story revolves round a young amputee, having lost their leg after a tragic motorcycle accident. After multiple operations over years together, one is finally fitted with a suction prosthetic leg, but still suffering. "There's so many thinks you struggle with that you don't think of. I couldn't sit at bar stools because they slide out from under you. You'd break toilet seats. I suffered a lot from the heat, rashes and ulcers. My stump would shrink or swell up and the suction prosthetic would fall off ”.

Dr. Aditya Khemka is one of only a handful of orthopaedic surgeons in the world and only Indian performing osseointegration surgery for amputees. His ambition to become a leader in osseointegration surgery started when he was a young child watching “The Terminator” movie. How to combine robotics and humans? This passion inspired him to develop and expand this technology for amputees along with a leading surgeon from Australia, to enable mobility, to enhance comfort, reduce pain and to facilitate a better quality of life. The radical procedure sees a titanium rod implanted directly into an amputee's bone, creating an interface that connects directly onto a prosthetic limb. The resulting bionic leg – in which bone and muscle grow around the upper part of the rod and a system of hydraulics, and sensors drive the lower limb – allowing patients almost the same range of motion and movement as an able-bodied person.

Osseointegration can be achieved in amputees as a single or a two-stage procedure over 6 weeks. Because the leg is connected to the skeleton, patients often remark they can “feel the ground” under their artificial foot for the first time and are able to walk in unknown places in the dark. It bears little resemblance to traditional prosthetics, which can be painful, impractical and cumbersome and it improves the quality of life. "They go from being a disabled person to someone who is special - with something extra" Dr Khemka says.

Para-Olympians, American and British military personnel are among those who have benefited from the revolutionary technique. Patients have taken this leg parachuting, deep sea diving, working on a farm and even strenuous activity such as mountain climbing. “Osseointegration or bionic surgery as it is popularly referred to is the need of the hour, and moreover to ever increasing amputee population in India,” says Dr. Khemka.

About Dr. Aditya Khemka:
Dr. Aditya Khemka is an Orthopaedic Surgeon currently practising at Hinduja Healthcare Surgical, Khar, Mumbai in addition to being a visiting surgeon at Bombay Hospital & Research Centre as well as Raheja Fortis, Mahim. He specializes in hip, knee, trauma and osseointegration surgery. He has a keen interest in Revision Hip and Knee Arthroplasty (Joint Replacements), especial Total/Partial Femur Replacements. He is also a research scholar of the University of Notre Dame, Australia and prominent member of the Osseointegration Group of Australia.

His immediate goal is to introduce Computerized Navigated Surgery and Robotic Osseointegration to India. Being only a handful of surgeons across the world who can perform osseointegration surgery, and the only Indian, the aim is to bring this world class technique to India where amputees suffer from immense problems.
Dr. Khemka aims to maximize the number of patients, whose lives can be benefitted through his areas of specialization in Orthopaedic Surgery. Till date he has conducted and assisted over 1000 such patients ranging from 6-month-old child to a British war veteran who was a victim of the land mine in Afghanistan.

He values a standard of care that is dynamic and reflects current evidence based medicine to optimize outcomes and provide the best of care for patients centered on compassion and respect. He promotes and participates in academic and clinical excellence through continued medical education, research and scientific publications.

Dr. Khemka graduated from Greenlawns High School, Mumbai, India in 2001 and completed his initially years of junior college at Jai Hind College, Mumbai India. He studied medicine at K.J Somaiya Medical College & Research Centre, Mumbai, India from 2003 to 2009. He then pursued his interest in surgical specialities by pursuing clerkships in Cardiothoracic Surgery, Bariatric Surgery and Minimally Invasive Surgery in the United States at prestigious institutions including the Yale New Haven Medical College & Hospital as well as the Brookdale University Hospital.

Dr. Khemka then joined Indian Orthopaedic Training in 2009 at the Jawaharlal Nehru Medical College, KLE University, Belgaum, Karnataka, India and obtained his degree in orthopaedics, MS (Orth), in 2012. He then took up Senior/Chief Registrar jobs at various municipal hospitals in Mumbai including The K.B. Bandra Babha Hospital and the J.J. Group of hospitals before joining Global Hospitals as a Senior Fellow in 2013.

He then moved to Nijmegen, The Netherlands where he completed a three month fellowship in Cemented Hip Arthroplasty with Prof. Jan Paul Frohlke, Dr. Wim Scheurs, at the Radboud University Hospital & Research Centre which is an Exeter, UK approved centre.


For more information visit: https://www.dradityakhemka.com
Posted by SUJATA TAWDE at 4:10 AM