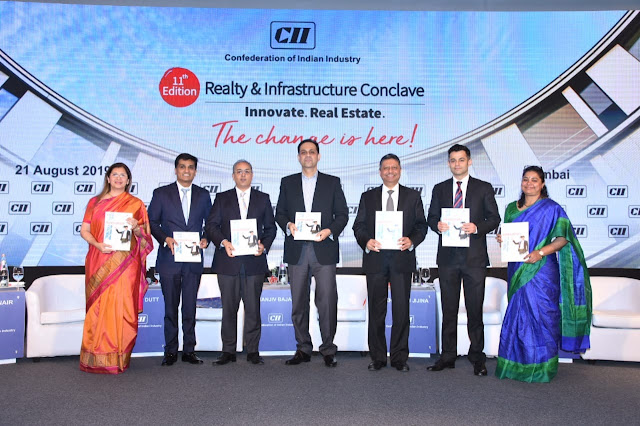 ·         Technology upgrade and innovative strategies continue to drive growth making Indian real estate lucrative for occupiers and investors
·         Investments remained concentrated in Delhi NCR, Mumbai and Bengaluru accounting for 74% of the total institutional investments during 2009-18
·         Investments in commercial office space rose to INR 622 bn in 2014-18 from INR 105 bn in 2009-13, a six-fold jump due to strong office space demand

Institutional investments increased in the last ten years and have improved investor confidence, risk appetite and transparency. Enhanced use of technology across asset classes have changed the outlook of investors towards Indian real estate. As a result, investments have more than tripled to INR 1,400 bn during 2014-18 as compared to INR 465 bn during 2009-13, says the latest CII-JLL report ‘Innovation Led Opportunities - Changing IndiaE 2�™s Real Estate Landscape’, released today at the 11th Edition of CII Realty & Infrastructure Conclave.
Traditional real estate segments such as residential and commercial have been using modern technology across construction, planning and development for over a decade now. Policy reforms in the sector, the concept of shared economy giving rise to new asset classes such as co-living and co-working spaces and technology driven businesses resulting in the increased interest in data centers have together made times exciting, both for occupiers and investors. Additionally, introduction of Real Estate Investment Trusts (REITs) have opened new doors for retail investments in commercial real estate.
“India has gradually transformed into an investment destination of international repute post the global financial crisis and real estate and infrastructure have played a vital role. Within the space, adoption of technology coupled with policy reforms is one of the key factors for investors to consider greater participation,” said Ramesh Nair, Chairman, CII Realty and Infrastructure Conclave and CEO & Country Head, JLL India.
“While metros like NCR-Delhi, Mumbai and Bengaluru accounted for 74% of the total institutional investments during 2009-18, we expect tier II and III cities to draw more funds in the coming years. Government’s focus on the growth of smaller cities is leading the change,” Nair added.
The report also highlighted that the commercial office segment witnessed the maximum share of institutional investments in the past ten years. Rise in the development of environmentally sustainable buildings and subsequent demand from occupiers have added strength to this trend.
From 2009 to 2013, opportunistic funds returned to Indian markets and picked up marquee assets in select offices (commercial and IT parks/SEZs). India’s improving reforms scenario added value to the overall scenario. Notification of REIT regulations in 2014 led to a deluge of investments in high yielding assets with attractive valuations. This was especially in the non-IT office space as most quality IT/ITeS assets were acquired by funds. Investors took note of the innovation introduced at all levels.
With a superior sustainability quotient, Grade-A offices with single ownership and limited supply have pushed global investors to close large deals. But lower availability of quality assets has led to large investors chasing entity level deals leading to extended investment cycles. As a result, the share of investments in the office segment declined during th e first six months of the year as compared to the corresponding period the last year.
Commenting on the investors’ preference, Samantak Das, Chief Economist and Head of Research & REIS, JLL India said, “Investment strategies have shifted to long-term partnerships from being merely opportunistic. There has been a rise in investments in the past decade. Institutional investments in real estate in H1, 2019 stood at INR 195 bn, reflecting continued momentum of capital infusion. The investment climate, however, in the first half of 2019 was uncertain. Initially, this was due to the NBFC default crisis and later due to general elections.”
Click here to download the report, Innovation Led Opportunities: Changing India’s Real Estate Landscape.
A bout CII
The Confederation of Indian Industry (CII) works to create and sustain an environment conducive to the development of India, partnering industry, Government, and civil society, through advisory and consultative processes.
CII engages closely with Government on policy issues and interfaces with thought leaders to enhance efficiency, competitiveness and business opportunities for industry through a wide portfolio of specialized services and strategic global linkages. It also provides a platform for consensus-building and networking on key issues. Extending its agenda beyond business, CII facilitates corporate initiatives for integrated and inclusive development across diverse domains.
India is now set to become a US$ 5 trillion economy in the next five years and Indian industry will remain the principal growth engine for achieving this target. With the theme for 2019-20 as ‘Competitiveness of India Inc - India@75: Forging Ahead’, CII will focus on five priority areas which would enable the country to stay on a solid growth track. These are - employment generation, rural-urban connect, energy security, environmental sustainability and governance.
Founded in 1895, India's premier business association around 9000 members, from the private as well as public sectors, and an indirect mem bership of over 300,000 enterprises from around 276 national and regional sectoral industry bodies. With 66 offices, including 9 Centres of Excellence in India, and 10 overseas offices in Australia, China, Egypt, France, Germany, Singapore, South Africa, UAE, UK, and USA, as well as institutional partnerships with 355 counterpart organizations in 126 countries, CII serves as a reference point for Indian industry and the international business community.

About JLL India
JLL is India’s premier and largest professional services firm specialising in real estate. With an estimated revenue for FY 2018-19 expected to be approx. INR 4,000 crore, the Firm is growing from strength to strength in India for the past two decades. JLL India has an extensive presence across 10 major cities (Mumbai, Delhi NCR, Bengaluru, Pune, Chennai, Hyderabad, Kolkata, Ahmedabad, Kochi and Coimbatore) and over 130 tier II & III markets with a cumulative strength of close to 11,000 professionals.
The Firm provides investors, developers, local corporates and multinational companies with a comprehensive range of services. This includes leasing, capital markets, research & advisory, transaction management, project development, facility management and property & asset management. These services cover various asset classes such as commercial, residential, industrial, retail, warehouse and logistics, hospitality, healthcare, senior living and education.
JLL India won the Five Star Award for ‘Best Property Consultancy at the International Property Awards Asia Pacific 2018 -19. The Firm was also recognised amongst the ‘Top 100 Best Places to Work in India’ in 2017 & 2018 in the annual survey conducted by Great Place to Work® and The Economic Times. It has also been acknowledged as ‘Property Consultant of the Decade’ at the 10th CNBC-Awaaz Real Estate Awards 2015. For further information, please visit jll.co.in