#Sanju is not a BioPic, it scores with Raj Kumar Hirani's signature OTT humor 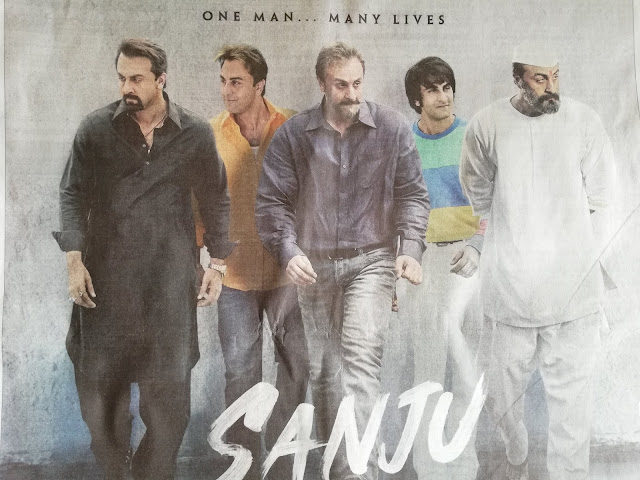 Movies are neither my Tubs of Popcorn nor scoops of IceCream. For many of us  Sanjay Dutt = Deadly Dutt + Spoilt Brat , who can neither dance nor act ... efficiently . For me,  Ranbir Kapoor = EXs of Sonam, Dipika , Katrina and still when I received the bunch of First Day First Show Sanju Movie tickets FOC, I went 1/100th heartedly.
Alas , I did not like opening scene at all and sat there cursing myself... wondering why the hell Anushka Sharma could not find properly fitting eyelashes , lenses & WIG. Actually all the wigs, yes there are too many from Paresh Rawal's to Sonam Kapoor's to Manisha Koirala's to Ranbir's Four+ ... none of them do justice ... or add face value to the characters they are portraying.
Well to cut a long story short ... As claimed Sanju is not 100 %  Bio pic . It's only 49% Biopic + 51% Entertaining Fiction ... that too Rajkumar Hirani style OTT Gujju stereotyping. This movie is 5* ... Yes, I repeat Five Star.
It has 3 important features that make any movie ... Super Duper Hit ... 1. Story 2. Story 3. Story 4. Raju Hirani's direction & dialogue  / Screenplay : Abhijat Joshi ( Whistle ... Whistle ... more whistles ) 5. Performance of Vicky Kaushal, The USP of #Sanju is Kamli- Kamlesh Kapasi- Vicky Kaushal is almost 99% fictional character. Followed by Ranbir Kapoor, Jim Sarbh , Paresh Rawal , Manisha Koirala , Anushka in this order only. Is it just partial memory loss that Priya Dutt's character is given hardly any footage compared to Manyata Dutt ?. But then again , this is not Biopic. It's just a Bollywood movie that's why it blames Media conveniently yet unconvincingly .... for Sanju's problems.

Sanju is gonna hit a jackpot. Every scene of d movie was mesmerizing with Raju Hirani touch. Was glued to d seat from begn to end. U would become a Sanju fan if u r not... MUST WATCH MOVIE....there is no RACE for this movie for sure