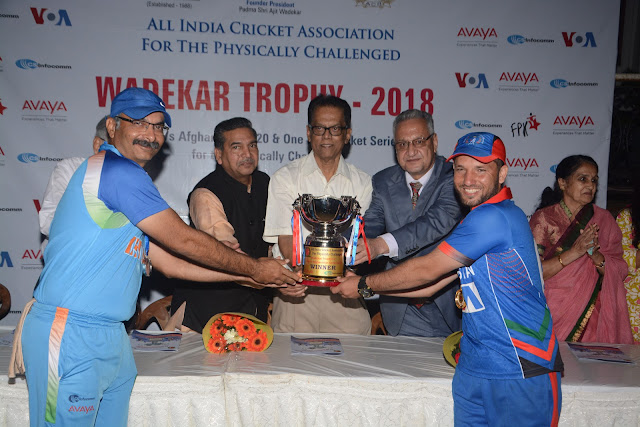 Sachin Tendulkar Gymkhana at Kandivali concluded the India- Afghanistan batting line-up. In this series, 3 matches of 20 overs and 2 matches of 40 overs were played. India won 20 over series against Afghanistan by 3-1, whereas the match tie was achieved by winning both the matches in 40 overs. Afghanistan won the match by 58 runs in the last match of 40 overs. In this match, Afghanistan scored 148 runs in 29 overs. India got only 90 runs in 21 overs. Specially, all the batsmen of both the teams have been dismissed.
In T 20 match, players proved their mettle as: Best Bowler-Shirin Aga (Afghanistan), Best Batsman –Akhabari (Afghanistan), Best fielding-Kudartula(Afghanistan ), Man of the Match-Pawan kumar (India), Man of the series-Taufiqe((Afghanistan ) excelled.

Great, I read your blog and especially this excellent article that you have described very well about cricket and keep writing۔ and this photo is beautiful.?

I have made a special blog post (link at the bottom of this comment ) on my site Infinite Knowledge that has the ability to amaze all the cricket lovers !!!

PSL Schedule 2020Great site and great theme, I was really surprised to read this. Most people want this, and you've helped all of us.
Thank you so much for sharing and taking precious time to write and share your thoughts. Nice to know about it. This is really informative. Please keep publishing this post. I'm impressed with your site's blog.