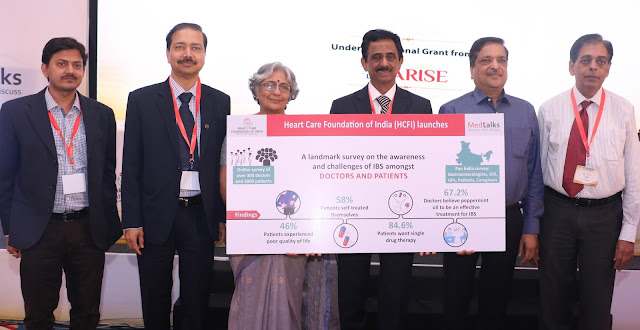 Irritable Bowel Syndrome (IBS) is the 2nd most common cause of work absenteeism in India & negatively impacts quality of life reveals survey by HCFI
·         Medical Practitioners surveyed feel that peppermint oil is a safe and better treatment option that can help alleviate symptoms
·         Over 3000 patients and 300 medical practitioners participated in the survey
A study conducted by the HCFI, a leading National Health NGO has revealed that about 5-10% of the population surveyed experiences symptoms of Irritable Bowel Syndrome (IBS) such as abdominal pain, diarrhea, constipation or incomplete evacuation. Yet, majority of them do not seek medical help.
The study aimed at analyzing IBS from the physician and patient’s point of view – awareness about the disease, its impact on day-to-day life and treatment options. It is interesting to note that even though 84.6% of the respondents felt that abdominal pain or other symptoms of IBS cannot be ignored, an overwhelming 58% of them use over-the-counter medications for relief and did not see a doctor. Given the impact of IBS on a person’s day-to-day life, it is important to raise awareness about IBS amongst both the medical fraternity and patients about IBS.
Speaking about this, Dr. Philip Abraham from P D Hinduja Hospital Mumbai, said, “IBS is a chronic common condition of the digestive system and is second only to the common cold as a cause of absence from work. This condition often begins in young adulthood with women twice as likely as men to be diagnosed with it. Most people with IBS have a mild form of the disorder and can cope quite well without getting any treatment. However, sometimes, the symptoms are so strong that it can significantly affect everyday lives, causing distress. A number of natural therapies have been used for the treatment of IBS. It is possible to relieve the symptoms of this condition through antispasmodics. Peppermint oil has emerged as a safe treatment option for the condition.”
The most common symptom of IBS is abdominal pain with changes in bowel habits (diarrhea and/or constipation). Abdominal pain is typically crampy and varies in intensity. Some people notice that emotional stress and eating worsen the pain, and that having a bowel movement relieves the pain. Women may notice an association between pain episodes and their menstrual cycle.
Dr Chetan Bhatt from Sir H N Reliance Foundation Hospital , Mumbai, opined, “Currently, there are many challenges that cloud the diagnosis and subsequent management of IBS. Some of these include lack of consistent biological markers, reliance on patient symptoms for diagnosis, difficulty in quantifying symptoms objectively, varying symptoms among individuals, and the fact that many organic conditions can masquerade as IBS. Lack of awareness about the condition among people and the medical fraternity at large further exacerbates the problem.”
The results of the survey conducted amongst the medical practitioners on the treatment methodologies for IBS revealed that almost 55.9% of the doctors use a symptom directed, multi drug approach in the treatment of IBS; 54.5% doctors prescribe antispasmodics; and another 30.8% prescribe antibiotics, antispasmodics.
About 80% of the doctors surveyed believe that an ideal antispasmodic for the treatment of IBS should offer relief from symptoms of abdominal pain/discomfort, bloating/flatulence and complete evacuation and also possess minimum side effects. Peppermint oil has emerged as a good option since almost half of the participating doctors feel that it is effective in relieving abdominal pain, gas, bloating and fecal urgency through its selective effect on the smooth muscles of the intestine.
Speaking about the need to raise awareness Dr KK Aggarwal – President HCFI  said, “A simple mantra that everyone must remember is that if there is no pain, it can’t be IBS. Raising awareness about the disease incidence is key. ”
There is an unmet need in the treatment of IBS, as despite the wide variety and effective treatments available, most patients do not get appropriate treatment. More widespread knowledge and proper use of available therapies (such as diet restriction and peppermint oil) will enable both the physicians as well as patients in achieving a better quality of life and relief from symptoms.
Some interesting insights from the patient survey include the following.
·         84.6% said that pain in abdomen and altered bowel habits cannot be ignored
·         58.3% people self-treat symptoms with over-the-counter drugs
·         33.3% feel that the condition is not serious enough to contact a doctor
·         8.3% would seek no treatment at all
·         46% say IBS hampers their daily life
·         50% of them said they would take multiple drugs including antibiotics, antispasmodics etc., each time they have an attack
·         41.6% opted for diet change or probiotics for each attack
Posted by SUJATA TAWDE at 6:21 AM