BRINGING the RAINBOW - The Hindware Story 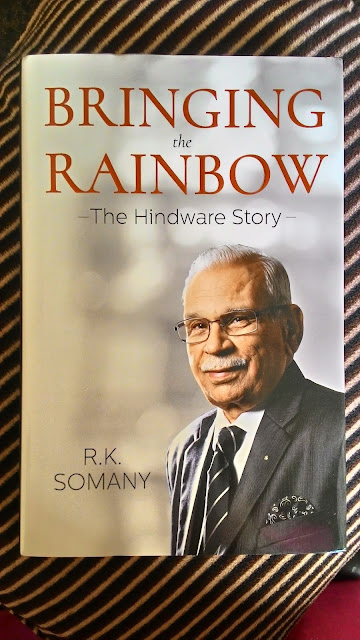 "It was 30th December ..... It is said that life is full of surprises, I would be starting what would become one of the greatest adventures of life " - when an autobiography of a famous entrepreneur (leading  industrialist) entices us at entry level with an exciting note like this, we are absolutely awestruck and resolve to #BringingTheRainbow in our life. We, the readers are so mesmerized by author R. K. Somany's fluorescent Rainbow, that an industrialist transforms into a lodestar to follow .... forever. That's the power of #BringingTheRainbow.

By now, all of you must be wondering , what's this #BringingTheRainbow ..... all about !

My brain was buzzing big time while browsing  #BringingTheRainbow . I must recite this story at the earliest ,  to my teenage nephew Aamen. There are very few books that impact you so heartily to share them with your loved ones, immediately. #BringingTheRainbow , an autobiography, is part memoir and part business guide. It lures you into reading it consistently. It inspires you to have high moral , to cultivate good habits ,  to be disciplined.

" Don't tell me stories of Crows , sparrows , kings & queens. Tell me a story of King Ram " .... goes a popular Marathi lullaby.  There's a Paradox here. the child does not want a story of King and Queen and still want the story of King Ram. Ram was not just a king but ' Maryaadaa Purushottam ' . This may be the PLUS point for the elders , but from the point of view of a child Ram's story , i.e. Ramayana , is an absolute block buster entertainment.

Similarly, an Autobiography by an Entrepreneur may not be on the wishlist s of many, but an exhilarating account ( #BringingTheRainbow ) of an adventurous Entrepreneur ( R. K. Somany ) is sure to grab infinite eyeballs. Instead of just singing the paeans, ladies and gentlemen, let me present to you the real McCoy ... #BringingTheRainbow

There's a very charming story about the title of this book. Once when the young R. K. Somany was driving in troubled mood , along rutted mud roads, on the way to find a way out of the stalemate land deal, a rainbow appeared on the horizon. The rainbow scene exhausted his anxiety and rejuvenated him. That was his moment of epiphany. That rainbow became his guiding mantra. Since that day, whatever he did as a businessman, a friend or a family man, he asked himself – “Am I #BringingTheRainbow to this endeavor ? The passion , the excitement , the color ?”

Mr. Rajendra Kumar Somany, Chairman & Managing Director of India’s largest sanitaryware manufacturing company HSIL Limited (formerly Hindustan Sanitary-ware & Industries Ltd) , an ace entrepreneur, accentuates the importance  of his family and St. Xavier's Collegiate School in shaping him to be the man he is today. He tells us how his character is formed through childhood memories such as - As the second youngest among a large brood of children, he often had to wait, and fight, for a chance to play. This instilled in him a fierce determination and fighting spirit. He learned the importance of punctuality, correct behavior, conduct , speech, etiquette and 'corporate citizenship' - to repay those who have given us, be it investors, the employees , or society at large, that fosters our well-being.

The school instilled in R. K. , a fierce desire to win and taught him the value of hard work.He was a bit old for his class when he joined the school. He was given a double promotion in the fourth standard due to his good performance. The euphoria was shortlisted as he failed that year and had to repeat the class. That incidence taught him that there are no shortcuts to success. Failures are the pillars of our success. We must draw right lessons from them and not get into a negative frame of mind. There is no substitute for hard work. Once his finger got caught in a radiator fan and almost chopped off but he shrugged it off as the price of learning something new. This taught him another important lesson - to be successful, one has to be in the thick of action. Observing others from a distance and barking orders does not work fully. Unless you know the nuts and bolts of the issue at hand-you will always be at the mercy of others. Even today he tries to teach himself something new. The challenge of picking up new skills and knowledge keeps him alive, fresh and in tune with the times.

R. K.'s initiation into the world of commerce began as soon as he finished school. Learning the traditional Marwari system of single-entry bookkeeping was drudge work. It was the very foundation on which the entire business was built. He joined R.B Rodda & Co ( India's leading gunsmiths ), which was purchased a few years earlier by the family. Since childhood he had natural affinity for tools and machines , so he learnt fast and loved his profession. He expanded Rodda's business manifold before he left for Delhi.He had a packed schedule while pursuing B.Com. degree, college in the morning, full day at office, French classes three times a week and studying at night. He learnt 'the art of Time Management' an important lesson , practically. Even now, nearing eighty, he works an average of sixteen to eighteen hours a day and he is very punctual too.

From an early age R.K. wanted to do something to alleviate the plight of those who had to go out into the open to relieve themselves. This probably played a small role in his choice of the sanitaryware sector.

In 1959, the Somanys decided to manufacture the sanitary ware ,India’s first vitreous china ( it did not absorb water even if the product chipped). They were determined to go in for the latest technology and provide Indian consumers with the best products.They partnered with Twyfords Ltd. an English firm.

The production process in the sanitary ware industry requires close supervision. A family member needed to visit England and train for a few months. R. K was the only family member available so he entered the ceramics industry, of which he knew nothing. The training was rigorous, through and physically taxing. He learnt the intricacies of making ceramics on the shop floor and all the trade secrets. It was an education no university degree could have replicated.

Soon after returning from England R.K. moved to Delhi. He plunged headlong into the task of building the factory. They were new players in the industry, their brand H Vitreous was unknown and they had only a handful of dealers across India. The odds seemed stacked against them but their vitreous products were far superior in looks , finish, durability and overall quality, and therefore, a much better value proposition in spite of the higher price.

As they rapidly increased the production , they began to benefit from the economies of scale. They cut prices, while being able to maintain their strong margins. Demand soared and despite R.K.'s best efforts , production could not keep pace with demand. This meant that Hindustan Twyfords was riding a crest.

Allowing rampant black-marketing would have given them higher short term profits , but would have negatively affected the bonds with customers. R. K. was inordinately proud of the Somany family's reputation as that kind of goodwill takes decades to build but can be destroyed in minutes. R. K. was faced with a matter of principle , he went with his gut instinct, which proved to be beneficial over the long run. This incident led him to introduce an 'innovation', which has now become a standard practice -the setting of maximum retail price ( MRP ).

Today ,Hindware is a well reputed household name today, but R. K. struggled fiercely , without compromising on the quality of products and Somany's goodwill to finally have HSIL emerge as a market leader. HSIL is the first company in the Building Materials Industry to be awarded the prestigious ISO 9001, 14001 and OHSAS 18001 certificate.

Apart from the many personal struggles in his path, there were the professional struggles too that held him back- the socialist era was not to kind to entrepreneurs ; the Emergency led to a lot of harassment; lots of Hindware products were sold in the black market; many dealers selling the products above the maximum retail price. Somany successfully waded through all these wars, but there were more lined up for him on the political front. He was up against I.K Gujaral, former Prime Minister of India and Bansi Lal, former Chief Minister of Haryana – both battles that he eventually won. He even had to endure a personal fight where he stood against two of his own brothers.

#BringingTheRainbow is an awe-inspiring account of how a dedicated , disciplined , hardworking young man, R. K. erected an exquisite empire from scratch. In 2013, the World Confederation of Business honored him with the ‘World Leader Businessperson’ recognition.

#BringingTheRainbow enthralls you with many successful as well as drastic, daring actions by R. K. who learned fast from his failures and prospered. Reading it was an incredibly enriching experience as I have resolved to get up early and work harder 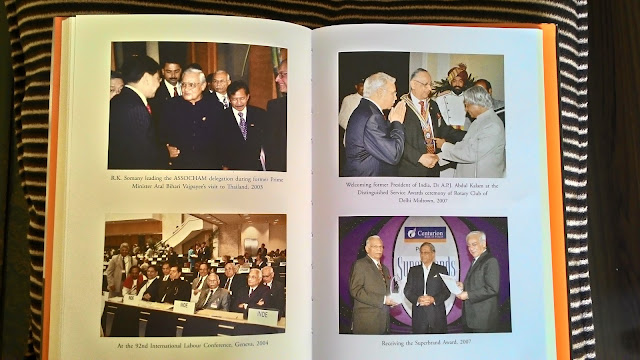 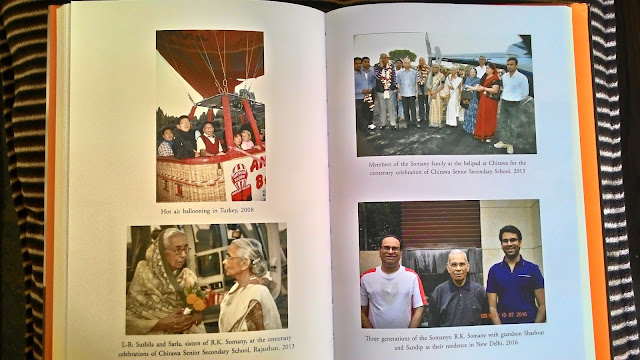 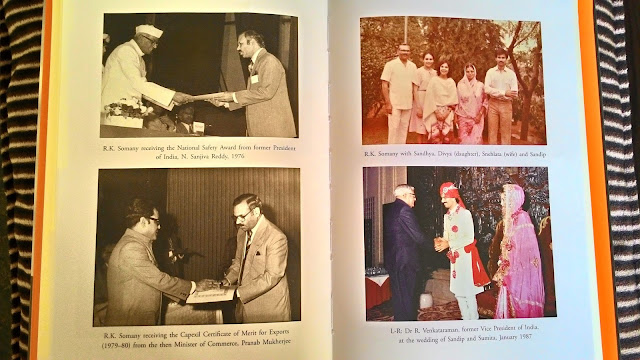 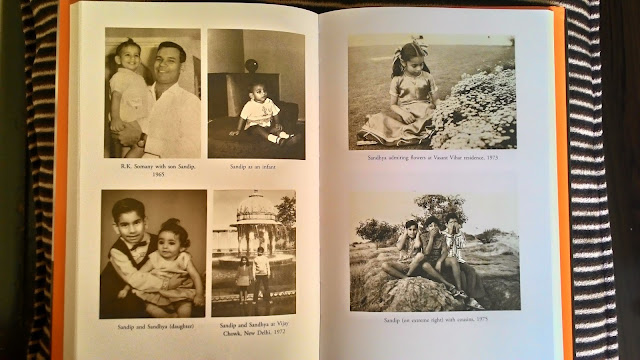 Hi Vaidehi, Welcome to 'Spirit Of Mumbai'. Same Pinch about #BringingTheRainbow . Even I wish to follow his path of Hard work and working on Ground Zero to achieve success.

The books seems amazing! Your review compels me to pick this book up and be inspired by Mr Swamy. #BringingTheRainbow would be a wonderful read, I am sure of it. Great post! :)

I don’t know how should I give you thanks! I am totally stunned by your article. You saved my time. Thanks a million for sharing this article.